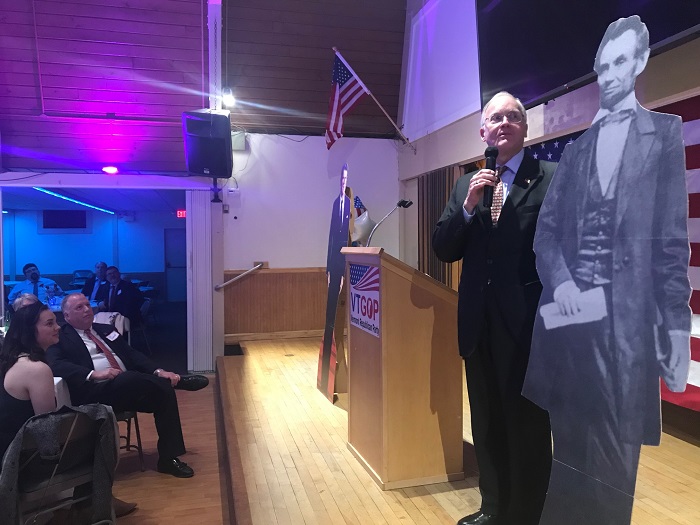 LOOKING UP TO LINCOLN: Former Vermont Republican Gov. Jim Douglas, speaking Wednesday evening at the 2020 Lincoln-Reagan Dinner at the Canadian Club in Barre, looks up to a cutout of famed Republican President Abraham Lincoln.

BARRE, Vt. — Top GOP leaders, appearing Wednesday night at the 2020 Lincoln-Reagan Dinner at the Canadian Club, gave impassioned pleas for conservatives to step up and run for office to counter liberal supermajorities at the Statehouse.

“We need more reinforcements in Montpelier,” Scott told the crowd. “That’s why I’m challenging all of us to get our state, county and local party committees, legislators and everyday Vermonters who share our values to find competitive candidates for the House and Senate.”

Fresh on the minds of Republicans was a recent attempt by Democrats and Progressives to override Scott’s veto of a paid family leave bill that included a $29 million payroll tax. The minority party, with the help of a few moderate Democrats, sustained the governor’s veto by just one vote last week. The tally in the House of Representatives was 99-51.

“With just 43 Republicans out of 150 in the House, and six out of 30 in the Senate, we, unfortunately, have to rely on the very few moderate Democrats we have left to stand with the taxpayers in Vermont on these types of issues,” Scott said. “They are under enormous pressure from their leadership and their base, so we can’t expect to rely on them every single time. The only answer is to grow our numbers.” 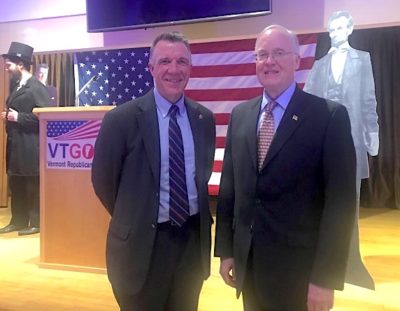 Douglas echoed that sentiment during his speech.

“We need to try as hard as we can to recruit those candidates because the math is the math. We need more reinforcements in the House of Representatives in order to ensure that the governor’s vetoes are indeed sustained,” he said.

Scott may face another veto-override attempt soon, especially following his veto of a minimum wage hike earlier this week.

“We’re going to see just how important this is over the next two or three months of this legislative session,” Scott said. “As you may have also seen, on Monday I vetoed another bill, my 18th veto, which was to raise the minimum wage. This is the perfect example of why we need more help in the legislature.”

On the issues, Douglas emphasized the demographic challenges facing Vermont.

“We know that Governor Scott has talked a lot about this over the last couple of years and it’s not a new problem,” he said, “it’s just one that the majority party doesn’t seem to take very seriously.”

Douglas noted he created a special Next Generation Commission in 2006 to look into the concerning trends, and he also quoted from the commission’s report: “We must approach the future holistically by viewing economic development and workforce development and education policy as necessarily integrative. It is crucial that Vermont simultaneously implement strategies to expand a skilled workforce, to attract and retain business, and to encourage skilled workers into the state.”

Douglas also noted that despite economic progress across the nation, Vermont seems to be lagging. He cited a recent article from The Economist: “Vermont has seen the weakest wage growth of any state in the past decade, despite a rapid rise in the minimum wage and low unemployment. What has Vermont gotten wrong that much of the rest of America has gotten right?”

“Vermont’s wages could stay floor-bound for some time because of what the article cites as an unfavorable mix of the types of jobs that we have here now,” he said.

He endorsed Scott’s yet-to-be-announced re-election bid in front of the evening’s 131 guests, which included lawmakers and dedicated members of the Vermont GOP.

“The first thing we do is re-elect Governor Scott,” he said after listing some of the top challenges facing Vermont.

Scott, throughout his speech, reiterated his well known economy-first message.

“It’s critical that we remain laser-focused on the things that appeal to Vermonters regardless of party — and that’s growing the economy, making Vermont more affordable, and protecting the most vulnerable.”

He said his budget puts investments back to the economy, including infrastructure, child care and workforce development, “all without raising taxes, living within our means, just like you and I have to do every single day.”

33 thoughts on “Govs. Scott and Douglas ask conservatives to step up and run for office in 2020”