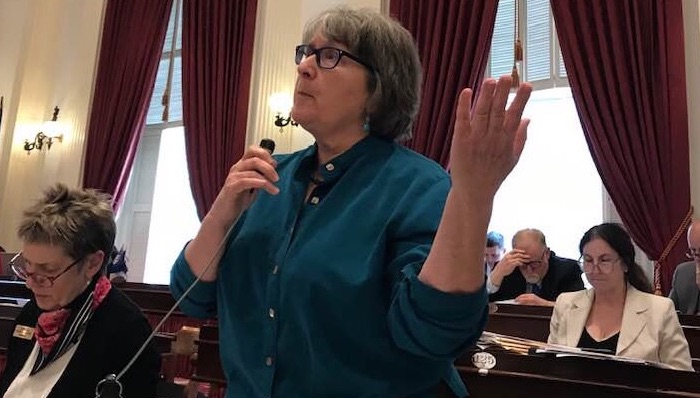 State Rep. Cynthia Browning, D-Arlington, speaks from the floor of the Vermont House of Representatives in 2019.

The failure of House Speaker Mitzi Johnson and House Majority Leader Jill Krowinski to deliver an override of Gov. Phil Scott’s veto of H.107, paid family leave, has them pondering a more successful strategy to override the governor’s latest veto — S.23, increasing the minimum wage to $12.55 by 2022.

The rest of their bright-and-shiny legislative agenda — aggressive climate change legislation, gun control, commercial cannabis — are all good candidates for a gubernatorial veto.

When the 2020 session began, many observers thought the overwhelming coalition of Democrats and Progressives could force moderate “Gov. Flip Flop” Phil Scott into accepting whatever bills reached his desk. Overrides seemed likely because even if the Dem/Prog caucus somehow failed to muster the necessary 100 votes, friendly independents and a disaffected Republican or two would probably ride to the rescue.

Instead, the Republicans stood as one and almost all of the independents opposed paid family leave.

Worst of all, from leadership’s point-of-view, four stubborn Democrats voted no and then had the nerve to push back publicly when criticized by leadership and some media. Monday, Rep. Cynthia Browning, D-Arlington, rose on the floor of the House to deliver this verbal spanking:

Madame Speaker, I rise to express my disappointment in the behavior and public comments of the leadership of the majority caucus, which is my party, and of you yourself both before and after the recent vote on H.107 that sustained the governor’s veto.

I find the obvious efforts to flip member’s votes beforehand unseemly and disrespectful. I find the apparent efforts to find someone who voted no who would be willing to ask for a reconsideration afterward similarly deplorable. Were promises of rewards or threats of retribution made in these meetings? If so, that is standard political hardball, and unsurprising, but it is no less deplorable.

And I find the public comments by yourself and your leadership team that seek to blame particular legislators for your own failures of both substance and process even more deplorable. In our system if the legislative majority cannot get the governor to agree with a piece of legislation they must get support from two-thirds of the House. Apparently you failed to convince enough of us and you failed to manipulate the date of the vote in your favor successfully, as absences of those opposing did not occur. Will you be using the same bullying tactics in future veto overrides? You need to take responsibility for your own miscalculations rather than scapegoat individual legislators who had their own good reasons to vote no on H.107.

I believe that the first duty of any representative is to put their judgement and knowledge to work in service to their constituents within the framework of the U.S. Constitution and the Vermont Constitution. This dedication is the foundation of our democracy. You should honor it rather than using your power to undermine it, even when that service goes against your plans. Your behavior did a disservice to the House and to your party, which is also mine.

I ask you to accept that in the judgment of many H.107 was deeply flawed. I ask you to accept that the Administration has put in place a modest voluntary Paid Family and Medical Leave program that is designed to allow any Vermonter to obtain the same benefits that will be available to state workers. Let us work together to ensure that this new program works well for the Vermonters who need it. We can revisit the generosity and financing of the program in the future. And I hope that we can face future veto override votes with respect and civility, even as we disagree.

Predictably, after the H.107 override debacle word started circulating that the Vermont Democratic Party might try to punish their own “no’s” with committee reappointments or, more likely, a challenger in the August primary. VTDigger political columnist John Walters couldn’t get anyone on the record to say the local party apparatus will seek challengers, but wrote Feb. 11 that “off the record, local Dems are working hard to find some competition” for Rep. Chris Bates, D-Bennington, a no on H.107. Using his Vermont Political Observer handle, Walters himself engaged in a Twitter skirmish with no-vote Randall Szott, D-Barnard, saying “you just stand outside and snipe.” Szott fired back that “if trying to hold leadership accountable for their mistakes is ‘sniping,’ then I guess I don’t know what the word means these days.”

However hard the party tries to push the unreliables into the oncoming traffic of a primary, for darn sure it will seek a safely insuperable caucus in the November general election. H.107 no-vote Linda Joy Sullivan’s Bennington-Rutland seat will be up for grabs, as the lawyer/CPA is running for state auditor. Will the Dems find a more “reliable” candidate? Will Republicans seek to regain the seat once held by House Speaker Walt Freed? Stay Tuned.