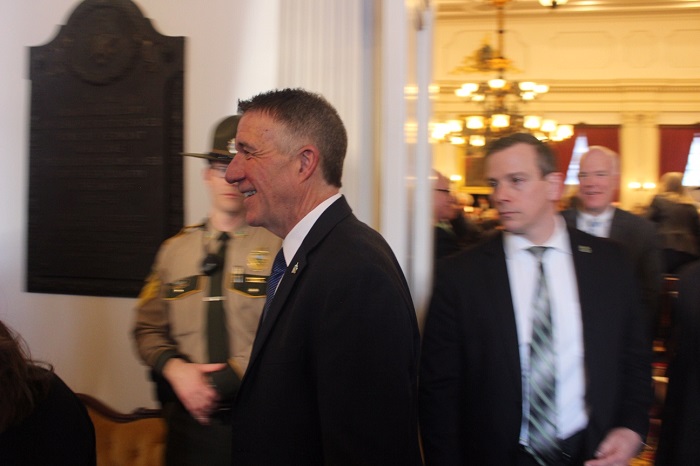 STATE OF THE STATE: Gov. Phil Scott once again stuck to the budget and economy in his State of the State address delivered Thursday afternoon at the Vermont Statehouse.

MONTPELIER — In his State of the State address Thursday, Gov. Phil Scott stuck to his fundamental message on improving the economy in the midst of a demographic crisis facing the state.

Now in his fourth year as governor, Scott said the cost of living continues to be too burdensome and the population just keeps getting older.

“Businesses, families, entire communities are doing their absolute best to maintain budgets to meet their needs with fewer options and fewer people and higher costs than they had last year and the year before that,” he said. “Sustainable economic growth has become too hard and too rare in many areas.”

To make his point, he shared some startling statistics.

He added that only three counties in the state have gained workers, while the other 11 have seen 18,000 workers flee.

One of the most nationally laughed-at solutions to the dwindling workforce problem has been Vermont’s remote worker recruitment program, approved in 2018. Under that program, workers who moved to Vermont but worked remotely received up to $10,000 for moving expenses and other costs. The governor and lawmakers approved the plan hoping out-of-state workers would relocate and pay taxes in Vermont. As of Jan. 6, all the funds allocated for the program have been awarded.

Scott defended the program as a resounding success.

“Since then we’ve received world-wide attention, more than $7 million in free advertising, thousands of inquiries, and relocated 371 people to 68 communities across 13 counties,” he said.

Scott said the program’s one-time investment of $500,000 has resulted in $1 million of tax revenue annually, plus a boost in local products and services sold to these new Vermonters. 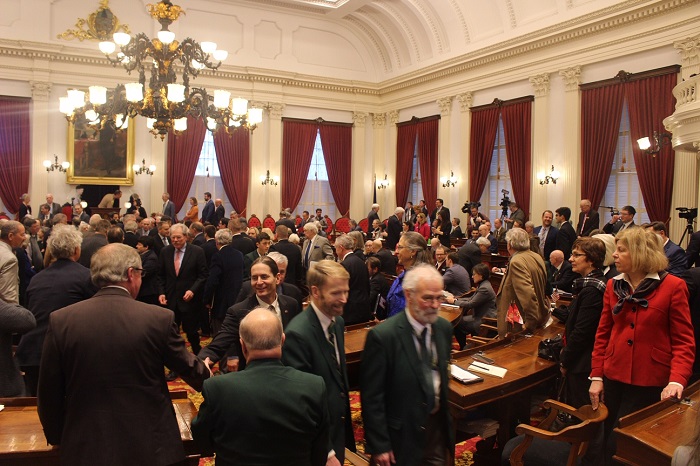 On boosting the economy, the governor said he wants to reduce the costs and obstacles that aspiring workers must endure to get into certain professions.

“My budget will include additional investments in training, with an emphasis on the trades, and more incentives for young adults and working-age families to stay or move here,” he said.

He also spoke of educating Vermonters “from cradle to career,” noting recent funding increases in childcare by about $10 million, $5 million in higher education, and almost $1.5 million in trades training.

On Act 250, the state’s land use law passed in 1970 to preserve the state’s rural character amid a population boom and new highway system, Scott praised lawmakers’ work to “modernize” these rules, including having more people live in town centers.

“The balanced approach we’re working on would enable concentrated development where people want to live and work, and when paired with my proposed investments in housing and economic development, will support more vibrant, walkable and livable downtowns and villages —  which, as the Speaker has said, supports economic growth and is a critical piece of our work to combat climate change,” the governor said.

On climate change and reducing carbon emissions, the governor seemed to prefer carrots over sticks. For example, he said he wants to continue subsidizing electric vehicles. And while he didn’t speak about the controversial Transportation and Climate Initiative (TCI) — a regional cap-and-trade style carbon tax that would hike the cost of gas — he did speak against against putting any further economic burden on Vermonters when it comes to transportation.

“I hear from Vermonters across the state, like those traveling long distances for work out of necessity, not choice, and others, like our seniors living on fixed incomes, who struggle to fill their gas tanks and heat their homes,” he said. “I simply cannot support proposals that will make things more expensive for them.”

He continued that there will be more incentives for creating affordable clean energy. 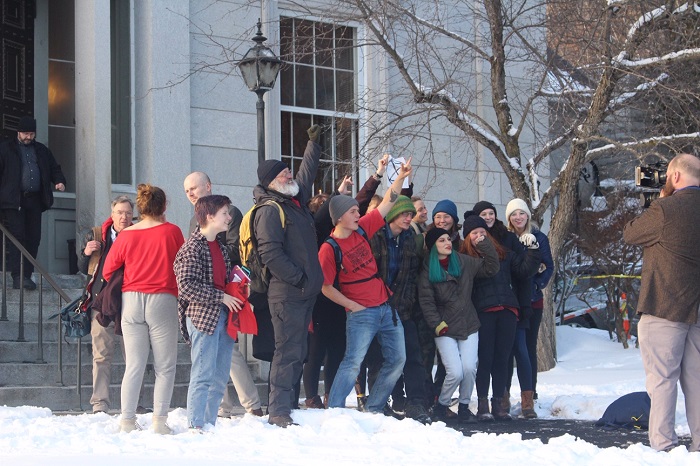 TROUBLEMAKERS: Climate change activists meandered into the House chamber and interrupted the State of the State speech with cult-like call-and-response chants, demanding legislative action on climate change. The protest delayed the governor’s address about 30 minutes, until law enforcement finally removed them from the chamber.

Other subjects mentioned in the address include improving health care for opioid abuse, preventing human trafficking, improving care for veterans, and more.

He also addressed the divisive culture of politics today.

“We must acknowledge the trying times we live in,” he said. “The pressure from political parties and special interest groups to ‘fall in line’ and ‘stay on message’ weighs heavily on some. Honest efforts and thoughtful ideas from good people are too often mischaracterized, misrepresented and belittled. And all of this is intended to divide us and bully us into an ‘us versus them’ mentality.”

As he was saying those words, a protest erupted in the House chamber as young climate activists  began chanting slogans, and continued chanting for nearly 10 minutes before being escorted out of the building. A handful of frustrated politicians left the chamber during the disruption, which delayed Scott’s speech by about 30 minutes.

The Vermont State Police released a statement after the incident, saying law enforcement members from the Capitol Police Department, working with state police and county sheriff departments, “removed 16 protesters from the chamber without incident.”