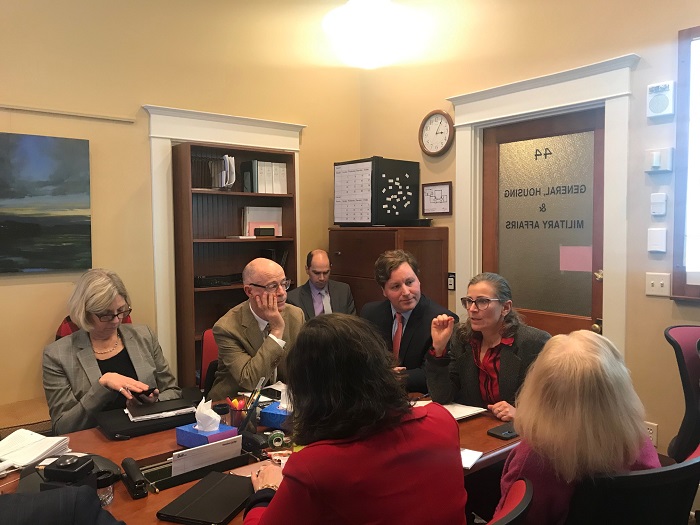 PAID LEAVE FOR ALL?: Beth Fastiggi, right, commissioner of the Department of Human Resources, tells the House Committee on General, Housing, and Military Affairs how the governor’s plan for paid family leave could benefit state workers.

Beth Fastiggi, commissioner of the Department of Human Resources, testified before committee members and explained how state employees can benefit from the lean program that ensures workers can take time off and still be compensated at 60 percent wage replacement for six weeks. The voluntary program would allow time off for personal illness, the birth of a child, an adoption or to care for a sick family member.

“For our state employees we have pretty generous sick-leave plans, but we also have a lot of employees that are newer, that don’t have that accumulated leave,” she said. “So we still see people that either have to take unpaid leave or choose not to care for a family member. This is a way that I think we can attract and retain some of the newer employees.”

The governor’s plan for a state worker-based family leave plan originated last year as a twin-state plan, and included pooling resources with the state workers of New Hampshire. Scott gave a joint press conference with New Hampshire Gov. Chris Sununu to announce the concept, but the neighboring state has since abandoned the plan.

The Scott administration is now making the case that Vermont’s 8,500 state workers are are large enough pool of people to go it alone. The program for Vermont is expected to cost $2.5 million annually, or about $275 per employee.

Other private employers and individuals would be welcome to join the plan, but the cost per participant is anticipated to be slightly higher than what it will be for state workers.

Among other differences between the plans, H.107 would be mandatory for all Vermont employers and would be funded through a new payroll tax.

While H.107 could be operated by the private sector or a new state program — whichever is determined to be more affordable — Scott’s plan would be administered through the private sector. Requests-for-proposal would go out in the springtime to have it ready for implementation by the summer.

“We also support a broader bill that will provide comprehensive family leave to as many Vermonters as possible,” he told the committee.

In a contract that the Scott administration negotiated with the state employees union, it was determined that if Scott’s paid-leave program is not implemented, all state employees will instead get a 0.25 percent pay increase.

If H.107 is implemented, state workers would still get the pay bump, but they would also be subject to the new payroll tax.

“What is the benefit of offering a [leave program] to someone who already has it?” he asked.

Fastiggi answered: “It’s really those newer employees who haven’t accumulated a lot of leave are the ones who will really benefit.” She added that the less the program is utilized, the less overall cost the program will be.

Some groups, such as the Vermont Family and Medical Leave Insurance Coalition, propose 12 weeks of full-paid leave for taking care of a newborn, eight weeks for an illness or injury, and similar time off if something happens to a family member.

In 2018, Scott vetoed a Democrat-proposed paid leave program that would have cost the state about $17 million per year. Last year, the House passed a paid leave bill that included about $80 million in annual payroll taxes. The Legislature adjourned in May before the House and Senate could agree on the plan.