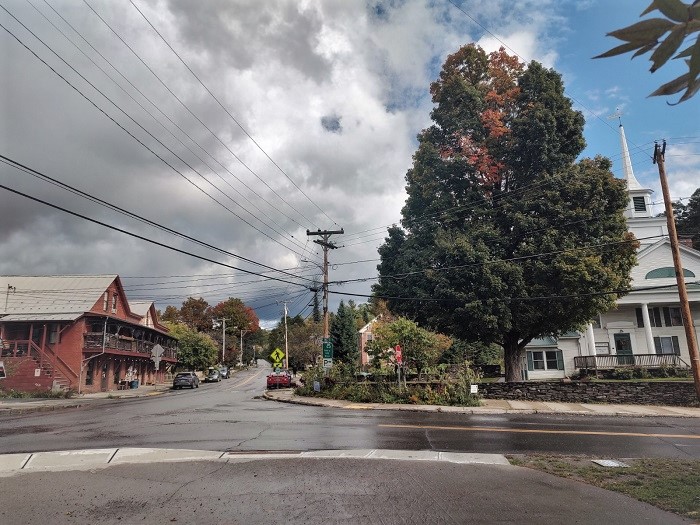 DOWNTOWNS IN VERMONT: Studies show that while downtowns are just a small fraction of a town’s layout, they account for a large share of cultural and economic activity. This photo depicts downtown Plainfield.

The governor and members of his administration were in St. Albans on Tuesday to highlight the latest investments in revitalizing downtown areas, which are important cultural and economic centers.

“This is what can be accomplished when state and local officials work together through this program,” Gov. Phil Scott said. “… This kind of investment improves our quality of life, grows our economy, and helps make Vermont an even better place to live, work and enjoy.”

The governor spoke in front of a historic stone building that is being revitalized to become a “mixed-use facility” to include eight new housing units inside. Scott says in the last five years more than 400 projects have benefited from $38 million in tax credits, which he said has leveraged another $800 million from outside investments.

For this year, 49 similar projects across the state were awarded portions of more than $4 million. He added that these improvements have led to more than $90 million in building and infrastructure investments, which does not include other business/housing developments spurred near these improvements.

Scott noted that in recent years Vermont has received billions in federal assistance for investments in broadband, water/sewer upgrades, economic development, as well as for climate change mitigation.

Lindsay Kurrle, the secretary of the Agency of Commerce and Community Development, spoke more on these efforts. She said St. Albans received almost $800,000 through the Downtown and Village Center Tax Credit Program. She said that money was used to help leverage more than $26 million in new construction activity.

“It takes a lot of work, and patience, and cooperation,” Kurrie said. “And this work is essential to the long-term health and sustainability of communities like St. Albans.”

The governor also spoke on the role of Tax Increment Financing. TIF projects are when the local city or town government financially supports new public infrastructure, often roads or water-related, and the hope is to spur private investments such as new housing and business that might otherwise have not considered those sites.

“I think it’s incredibly important to continue to invest in these programs that allow for the expansion of TIF districts,” Scott said.

The governor was also asked about his recent signing of a letter advocating for more federal assistance in heating fuel costs for residents.

“A lot of our citizens rely on LIHEAP [Low Income Home Energy Assistance Program] here, especially in the northeast, New England, and Vermont, and we know especially with the increase in the cost of fuel they are going to be impacted so we certainly want to work with the federal government,” the governor responded. “We’ve heard that there is some movement — I heard that Senator Leahy had proposed a significant amount for LIHEAP.”

According to The Hartford Courant, more than $1 billion in federal aid for home heating costs is coming to the nation.

The Vermont Preservation Trust and the Vermont League of Cities and Towns were two of the key organizations noted for contributing to this cause.

The importance of downtowns as economic and cultural centers was highlighted in 2020 in a report by the International Downtown Association.

“The findings from the downtowns highlight the economic role that downtowns play as centers of tax revenue generation, employment, and commercial real estate,” the report states. “Given their relatively small size (on average, about three percent of all citywide land), downtowns in this study deliver an average of 17% of the citywide property tax revenue, 43% of hotel tax revenue, and 12% of sales tax revenue.”