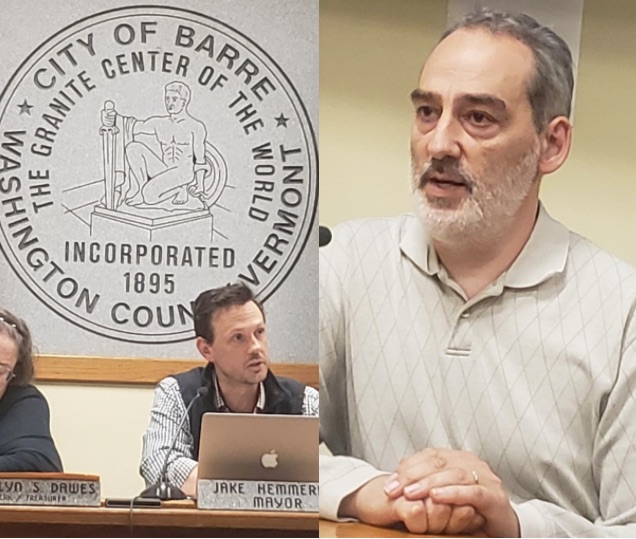 William Toborg tells Barre Mayor Jake Hemmerick and the rest of the City Council “I am concerned about the otherization that is going on. There are forces here that want to divide us. There are forces that want us to express hatred against each other.”

The Barre City Council got an earful from citizens concerned about three members of the city Diversity and Equity Committee telling fellow committee member William Toborg he should quit because he’s pro-life, and Chair Joelen Mulvaney’s emailed threat to mute him at future meetings.

The council took no formal action. Instead, several members urged the committee to try to get along and work together without the council needing to hire a mediator (suggested by Progressive councilors and agreed to by Mulvaney) or fire Mulvaney (suggested by several Barre residents in the audience).

Mulvaney kicked off the discussion with several minutes of remarks delivered via Zoom, including this apology:

“I apologize to the Barre City Diversity and Equity Committee for not being able to address the ideological differences that prevent us from doing harm to each other,” Mulvaney said. “I apologize to the City Council for not understanding how much and what kind of support is needed to do the work of identifying and making recommendations about Barre and equity within civic and social life.”

During her remarks, Mulvaney did not indicate whether or not she would mute committee member William Torborg, as she threatened to do in an August email after she criticized his pro-life stance and said Roman Catholic religion has no place in committee discussions, which is limited to “political” and “social” considerations.

Barre resident Carol Hebert watched the video of the August 12 committee meeting and said she was appalled how Mulvaney, Kaye and Wheeler treated Toborg.

“It was terrible,” Hebert said. “The fact that they ganged up on him. He was the victim. It doesn’t sit well with me. They owe him an apology personally.”

The committee seems to think that “saying it [diversity] and doing it are two different things,” Hebert said. “Anyone who would want to violate the first amendment right of anyone on the committee is not fit to serve.”

“Assuming the first amendment applies, it was a jaw dropping experience to watch it,” Kelly said. “I think it would be healthy to have on a Diversity committee someone who didn’t buy into every narrative.”

“What I can’t get behind is giving a particiption trophy to someone who wants to take away rights from 51% of the population,” Grant said. “Not by undermining the committee you want to undermine from within.”

Barre resident Anthony Williams said the video shows that Mulvaney, Kaye and Wheeler “were completely unhinged and weren’t hiding it anymore.” Toborg had just told them he had been physically assaulted for expressing his pro-life views (a car backed him against a wall at the polls on August 9), and rather than commiserate and support his right to free speech, they “boldly suggested they wanted him silenced and if not removed from the committee altogether….it seems that Ms. Kaye, Ms. Wheeler and Ms. Mulvaney were suggesting anyone who disagree with their stance is justified to receive an angry, violent response.”

One committee member who didn’t attend the August 12 meeting, and said he hasn’t watched the video, nonetheless questioned the criticisms aimed at Mulvaney and the two others.

“I don’t know what happened, I wasn’t there,” Christopher Roberts said. The press coverage  “was execrable. It was grossly onesided. We have always been respectful of each other.” He added that even videos don’t always tell the whole story.

Rosemary Averill agreed. “The issue is how Mr Toborg was treated. It was uncalled for. Something must be done. It cannot be brushed under the rug.”

That something of a legal nature might be done worried Lauzon. “I was concerned that if anyone threatened to mute, we could be exposing ourselves to litigation.”

Toborg agrees. “I was more concerned with what happened after the meeting, when Ms. Mulvaney said she would be muting me,” he said near the end of almost an hour of public testimony.

“I am conservative. I am pro-life, proudly….I have always believed in fighting for the powerless,” an attitude that conforms with and inspires his pro-life beliefs, Toborg said. Also, “I was concerned about the anti-Catholic bigotry at that meeting.”

Toborg said that his time on the committee has taught him that systemic racism does exist in Barre, although his understanding of the term may differ from other members’. He was quite concerned when flying the American flag or waving the Trump flag was considered racist by other committee members. “I expressed my disappointment in that,” he said.

“I am concerned about the otherization that is going on,” Toborg said, citing a midwestern man running over a teenager because he thought was Republican. “There are forces here that want to divide us. There are forces that want us to express hatred against each other.”

While urging the committee to work together, Both Mayor Jake Hemmerick and councilor Teddy Waszazak noted that Mulvaney had apologized. But was the apology actually about the muting threat? Said one audience member after the meeting: “We’ll see.” The next meeting of the Diversity and Equity Committee will be held Thursday, September 29 at 6 PM online.