New Hampshire lawmakers and Republican Gov. Chris Sununu reached a compromise on the state budget after a nearly two-month long stalemate. The House and Senate must approve the deal Wednesday.

The budget does not include a tax increase and promises decreases in business taxes in 2021 if the state’s revenue is more than 6 percent over projected revenue in fiscal year 2020. 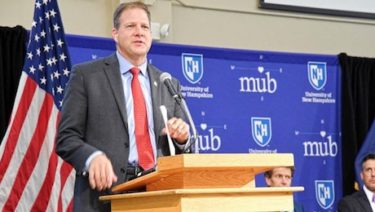 State programs will be safe from cuts if an economic downturn occurs due to a reduction in the structural deficit by 75 percent, about $70 million from the legislature’s proposed budget, according to a statement from Sununu’s office.

• In fiscal year 2020, if total revenue is 6 percent above projected revenue, business taxes will trigger down to 7.5 percent BPT and 0.5 percent BET for calendar year 2021.

• A tuition freeze at the state’s colleges and universities.

• A 3.1 percent increase across the board for the Medicaid rate

• A guarantee that a 2014 bipartisan agreement prohibiting general funds from going toward Medicaid expansion remains in place.

“Budgets are a statement of our values, and this budget compromise makes clear that New Hampshire values the people of our state and is committed to ensuring every Granite Stater has the resources and opportunities they need to thrive,” Soucy said in a statement.

The compromise will move New Hampshire forward, Speaker of the House Stephen Shurtleff, D-Concord, said in a statement.

“This budget preserves important Democratic priorities, including the largest investment in job training and public education in the history of our state that will advance educational opportunities for all and along with reinstating municipal aid will provide meaningful support to cities and towns and critical property tax relief to Granite Staters,” Shurtleff said.

Sununu vetoed the proposed budget presented by the Democratic-controlled Legislature on June 28. Lawmakers agreed to a three-month extension to keep the government running.

The compromise, which will need approval from the House and Senate, is something Sununu said he could support.

“The people of New Hampshire won today,” Sununu said in a statement. “This compromise budget does not increase taxes, and ensures financial promises can be kept to the people of New Hampshire. I worked closely with [Senate Minority Leader Chuck] Morse and [House Minority Leader Dick] Hinch and remained in close contact with them as these negotiations progressed, and I am hopeful that Legislative leaders – from both parties – can deliver this critical compromise when it goes before the full legislature on Wednesday.”