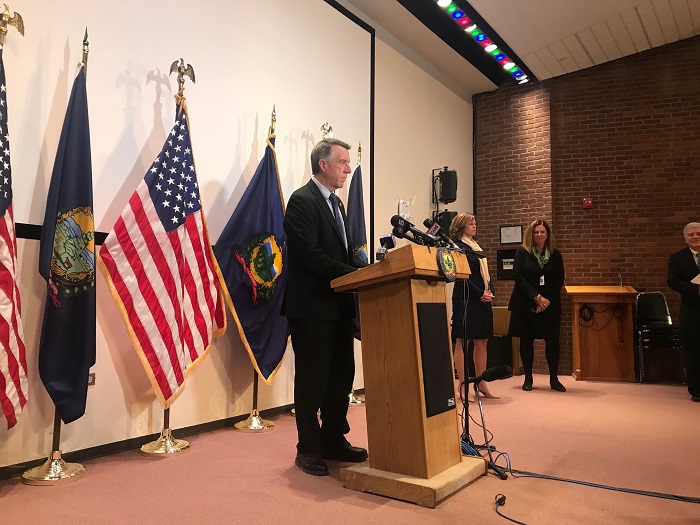 ECONOMIC WOES EXTENDED?: Gov. Phil Scott indicated at a press conference Friday that the economic hardships facing Vermonters could go on longer than first anticipated due to the coronavirus spread.

MONTPELIER — Gov. Phil Scott on Friday said Vermonters may have to wait a long time for business to return to normal as his administration pursues a COVID-19 response effort restricting citizens’ ability to work, support families and go to school

“We’ll sustain it for as long as feasibly possible,” he said. “We’ll get to the end of this and we’ll do it together.”

“I have tremendous faith in our inner strength here in Vermont and in the businesses that are working so hard to be creative,” he said, adding that the federal government would be providing relief in the form of small business disaster loans.

The Small Business Administration will be offering up to $2 million in assistance per business to help compensate for the temporary loss of revenue expected as businesses come to a near standstill, according to a statement from the governor’s office. The SBA’s Economic Injury Disaster Loans may be used to pay workers, fixed debts, accounts payable and other bills that can’t be paid due to government restrictions on business.

The interest rate is 3.75% for small businesses and 2.75% for private non-profit organizations.

Asked about the likelihood that restrictions on economic activities will last past April 6, the governor wouldn’t provide a clear answer.

“It’s too early to make that decision at this point, but suffice it to say we’re still increasing in the number of positives that we are seeing, and the exponential threat is still there,” he said. “I would expect we Vermonters need to prepare for a much longer period of time, but at this point, I’m not ready to declare that.”

As of Friday, Vermont is reporting 29 positive cases of coronavirus and two deaths. About 808 total tests have been conducted. Nationwide, the U.S. Centers for Disease Control and Prevention reports 15,219 cases of COVID-19 and 201 deaths from the virus.

By comparison, regular seasonal influenza cases total at least 38 million since October and have caused between 23,000 and 59,000 deaths, according to the CDC.

The low number of deaths in Vermont and across the country has led many to question if states have overreacted to fears about the coronavirus.

“The costs of this national shutdown are growing by the hour, and we don’t mean federal spending. We mean a tsunami of economic destruction that will cause tens of millions to lose their jobs as commerce and production simply cease,” the WSJ editorial board wrote. “Many large companies can withstand a few weeks without revenue but that isn’t true of millions of small and mid-sized firms.”

The paper’s editors note that businesses operate on thin margins and can run out of reserves within a month, leading to layoffs and business closings. The editorial states that “the layoffs will be measured in millions of people” if restrictions on economic activity continue beyond a month.

As to the funds and business loans states are expecting to receive from the federal government to compensate for lost revenue, the Wall Street Journal editorial board writes, “There is no amount of money that can make up for losses of the magnitude we are facing if this extends for several more weeks. After the first $1 trillion this month, will we have to spend another $1 trillion in April, and another in June.”

As Friday’s press conference, Scott referenced the first deaths in the state from the virus.

“Yesterday when we announced the death of two elderly Vermonters with COVID-19, we had a stark reminder why the mitigation actions and efforts we’re taking are absolutely necessary,” he said.

He added that Vermonters need to realize many of them will get this virus, and that while many won’t see serious symptoms, people nonetheless need to take precautions when it comes to spreading the virus to higher-risk populations such as the elderly.

“I want every Vermonter to know I fully understand the incredible economic and emotional toll Coronavirus is having and will continue to have on each and every one of us,” he said. “The measures we are implementing, while disruptive, are based on the best science we have from our experts.”

Earlier in the week, Vermont Health Commissioner Mark Levine noted that in South Korea, where testing is comprehensive, health officials have gained a solid measure of the coronavirus mortality rate — estimated at 0.6 percent. He explained that the more testing there is, the lower the death rate will be.

Friday’s conference focused the handful of economic measures being taken to ease the financial burden Vermonters are starting to feel.

This includes making unemployment available to all Vermonters who lose jobs during the government imposed shutdown. Scott added there have been staff increases at the Department of Labor and processes are being streamlined to make getting services easier.

He reiterated that there should be daycare services provided to anyone working in health care and emergency services dealing with the virus.

Scott also said he is asking legislators to look into providing support geared towards Vermont’s small businesses, especially those who close for family or medical reasons.

He said both the health care industry and the power utilities are each being asked to alleviate costs on their clients so that essential care and services aren’t cut off. For example, premiums are being waved temporarily for Dr. Dynasaur, the health insurance program for kids and young people.

“We’ve been through multiple challenges in our history,” Scott said. “If you take the 1927 flood here in Vermont, or you take the depression in the ’30s, certainly we’ve seen this in Irene, we got through it and we’ll get through this as well.”

“Many Vermonters are feeling understandably anxious, worried, perhaps angry, perhaps scared,” he said. “Social distancing can compound the feeling of isolation. We encourage all Vermonters to use this time of social distancing as an opportunity to reconnect with family, with friends, and your community in responsible ways.”

He added that spending time outdoors, taking time to learn new skills, following up on big projects and volunteering are all productive ways to spend some of the extra time.