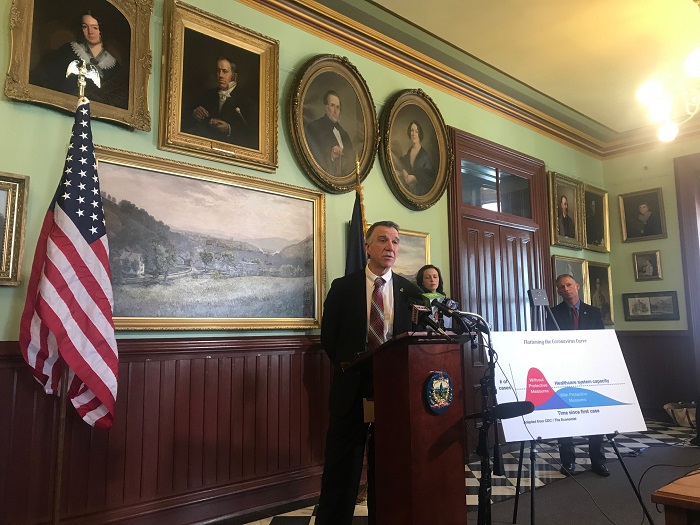 SHUTTING DOWN THE ECONOMY: Despite widespread concern that coronavirus fears may be overblown, the state of Vermont, led by Gov. Phil Scott, has closed all schools and canceled large public gatherings.

As Gov. Phil Scott ordered a ban on gatherings of more than 50 people and occupancy of any facility above 50 percent of its capacity, the head of the Vermont Department of Health said such actions were necessary — even if the virus’ mortality in the U.S. turns out to be comparable to other common illnesses.

“A half of a percent is still five times the rate that people die from the flu, so it’s still significant,” Health Commissioner Mark Levine said. “I don’t think that I would cheer about success at any point in time in the next two months because it’s really everyone doing all of the strategies that we’ve outlined that’s going to help us succeed.”

In South Korea, where over 140,000 residents have been tested for COVID-19, the mortality rate of the virus has been determined to be 0.6 percent. In a recent Coronavirus Disease Situation Report, the World Health Organization notes that the “true mortality of COVID-19 will take some time to fully understand,” and “mortality is to a large extent determined by access to and quality of health care.”

Levine said Vermont’s extreme response strategies will continue despite the economic hardships they will induce, and that mitigating coronavirus spread is the goal.

“These mitigation strategies do take weeks to months,” he said. “That’s why when we talked earlier about school closure, when it’s done too early, for two weeks, it’s not been shown to be effective very widely. When it starts a little later and goes a little longer, it’s been shown to be an effective strategy.”

Levine pointed to a chart illustrating that there’s a threshold for the state’s health care system capacity. The key goal is to keep the rise in infections from getting beyond that point.

“We’re trying not to let the curve fall in the red, and we’re trying to implement all of these things sufficiently early so that they have time to kick in and allow us to flatten [the curve],” he said.

According to latest state data, Vermont has tested 415 people and confirmed 12 cases of coronavirus. Nationwide, the U.S. Centers for Disease Control and Prevention reports 3,487 cases of COVID-19 and 68 deaths from the virus.

By comparison, regular seasonal influenza cases total at least 36 million since October and have caused between 22,000 and 55,000 deaths, according to the CDC.

The governor expressed sympathy toward Vermonters who may be concerned that the state’s extreme response to the virus might cause an economic collapse.

“I’m concerned as well about the economy,” Scott said. “Certainly, if it goes on for a long period of time it will be devastating. But at the same time, if we do this right and we have this period of time over the next month or two and we can get some control over this, I believe there’s a path forward.”

He continued that state officials are working with the federal government on strategies to alleviate the economic impacts the shutdowns are expected to have.

“I’ve been in contact with Congressman Welch, Senator Leahy — I had calls with them over the weekend and they are going to do everything they can on some stimulus to help us with the economy,” the governor said.

Among those facing economic hardships due to social distancing mandates are health care workers. These professionals, who need to be at work to deliver care to patients, must now find ways to care for their school-aged children at home for three weeks while schools are closed.

“There’s a great concern for that very issue — it’s something that we did contemplate in closing the schools,” Scott said. ” … We’re putting a plan into place so that we can provide for child care for those first-responders and those in the health care field that are going to be needed.”

The governor added that a program would be announced in the next few days to help remedy this scenario.

In addition to Vermont, more than 20 states are closing their public schools. Massachusetts, Washington, Illinois, Ohio and New York City have announced they are closing all restaurants and bars in response to the virus.