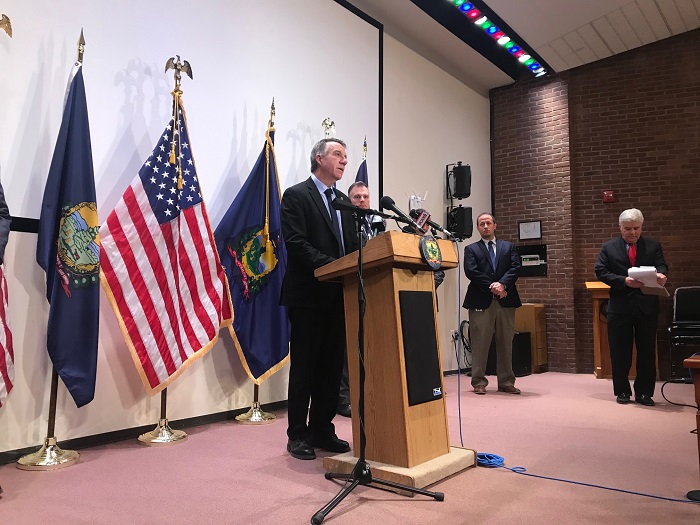 FED MONEY TO THE RESCUE?: Gov. Phil Scott is expecting a trillion dollar federal aid package to help Americans deal with financial woes related to bureaucrats shutting down the economy.

MONTPELIER — At a Wednesday meeting with press to review new guidance relating to child care facilities and Pre-K-12 school dismissal, Gov. Phil Scott said massive federal spending could be coming to help those hurt by the government’s shutdown of schools, restaurants and other societal institutions.

The Scott administration’s latest response to the COVID-19 pandemic, announced Tuesday, includes closing child care centers across the state, except where needed to support workers participating in the mitigation of the coronavirus.

Schools will also provide child care for these “essential persons” responding to the crisis.

When asked at the press conference how Vermonters will survive the state’s clampdown on business and society, Scott admitted the impact will be enormous.

“I’ve been in constant contact with our federal delegation, Congressman Welch, Senator Leahy — and I had a call from Senator Sanders yesterday afternoon all talking about, ‘What is it you need? What do you need to get through this?'”

Scott then alluded to a massive stimulus package.

“We’re going to need federal assistance, flexibility, in all kinds of different ways, and I know they are working diligently on this effort right now,” he said. “It looks like it’s going to be over a trillion-dollar package that will be coming to the states. So, suffice it to say, we don’t know what our needs are, though we are going to need some assistance in order to get through this.”

As part of that massive economic stimulus package, President Trump reportedly is considering sending $2,000 to some Americans. “I think we’re going to do something that gets money to them as quickly as possible,” Trump said.

Scott said even after closing schools and restaurants and prohibiting large public gatherings until April 6, more restrictions could be on the way.

“I want to again remind Vermonters that more measures are inevitable,” he said. “We’re already working on a directive for hospitals that will postpone elective procedures. More details will come on this.”

Vermont Health Commissioner Mark Levine said the administration is watching worldwide trends, and especially the virus’ activity in China, to see what Vermonters can expect in the months ahead.

“We have good experience now just by watching the rest of the world, because, as you know, the U.S. was not the first country to be infected,” he said. “So even though China has received a lot of criticism, they are in a phase where things are much more controlled, and they are seeing decreasing numbers in cases all of the time.”

Levine said South Korea — which saw its first cases of the coronavirus in early January — is an example of a nation that has handled the crisis relatively well. He noted the estimated death rate there may be much lower than in nations with less testing.

“Suffice it to say, the countries like South Korea that have shown the lowest case fatality rates have the most testing capability and have tested huge swaths of their populations, so their denominator of cases is very large,” he said.

“And since the mortality rate, we think, around the world is around 1 percent, they can show numbers that are significantly lower than 1 percent, because they’ve identified mild and possibly even asymptomatic cases with the abundance of testing.”

Levine also addressed the concern that many businesses are going to be hurt during the shutdown. He said he hopes they can adapt to survive.

“Even restaurants and bars can be innovative as they are all learning now, with bring something to your car, take-out priority, interacting with people in ways that they have to deliver food, but still being able to actually do that even though people can’t sit down at a table with one another inside their premises,” he said.

Nursing homes also are expected to have a challenging time as their patients are in the high-risk category. At least one of the state’s coronavirus patients is confirmed to be a nursing home resident.

Levine thinks those facilities are ready.