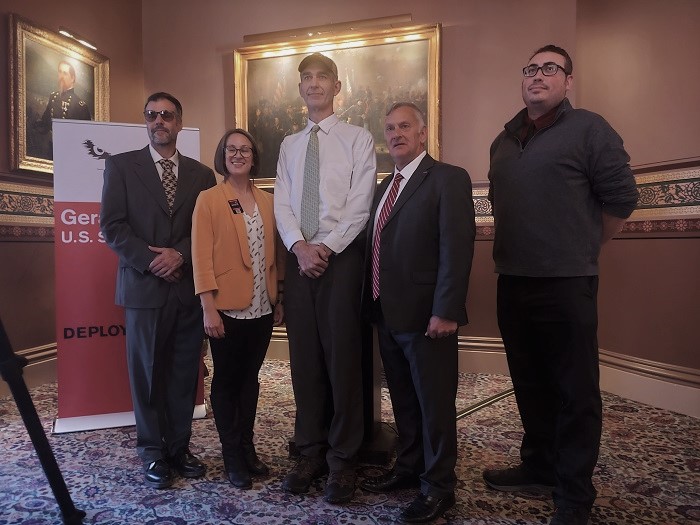 A handful of conservative candidates gathered at the Statehouse on Saturday to raise awareness about rising suicides in the military and to pledge their support for vets if elected to office on Nov. 8.

J.T. Dodge, a Republican candidate for Vermont Senate, helped organize the event. He noted that between 2001 and 2019, suicides among veterans increased by 36% — compared to 30% for the general population.

For Dodge, the issue is a personal one. He shared that he lost his father, a military combat veteran, to suicide.

“My father had served multiple tours in Vietnam and received purple hearts for his service,” he said. “He never recovered from the grief.”

Dodge said that he believes support services have improved since then, but that more can be done.

On the campaign trail, Dodge has said he is strongly against the carbon tax and other regressive green energy policies.

Gerald Malloy, the GOP candidate running against U.S. Rep. Peter Welch for U.S. Senate, also has reason to feel strongly about suicide in the military. Malloy graduated from West Point in 1984 with a commission as an active duty Field Artillery Officer, and served on active duty for 22 years.

“I think I have a pretty good idea of the sacrifices that service members and our veterans made,” Malloy said.

He emphasized that taking care of veterans is going to be a priority if he wins office.

“If I’m fortunate enough to get in and be your U.S. senator, that will be pretty much job one, to support our veterans and service members, as they should have the best care and the best equipment,” Malloy said.

Ericka Redic, the Libertarian Party candidate for U.S. House running against Democrat Becca Balint, said if she is elected she will work to get veterans the support they need.

“We need to make sure that when our service members return home, they are automatically put on a plan where they have VA health care and access to whatever it is that they need to return home. And I think that is a reasonable thing for them to ask of us,” Redic said.

She also commented that Vermont traditionally has had among the highest enlistment rates per capita, which means, “we have more families and more veterans that need our support,” she said.

She added that it’s the job of the U.S. Congress to both authorize wars and pass bills to support active and retired military.

“We need a new Congress this year, a new Senate this year, one that actually takes responsibility for the war powers, because it is the responsibility of Congress to make sure that our veterans have what they need, and that we are not in endless wars. We need to take that power back from the executive branch [of government],” she said.

“There is not a single family — regardless of political policy, orientation, view, background, walks of life — in this state that has not been affected by this issue.”

He noted that just 37% of individuals who committed suicide in Vermont were enrolled in any mental health services at that time.

“That means the remaining number of those people that died by suicide were [not getting] any form of mental health treatment,” Sammis said.