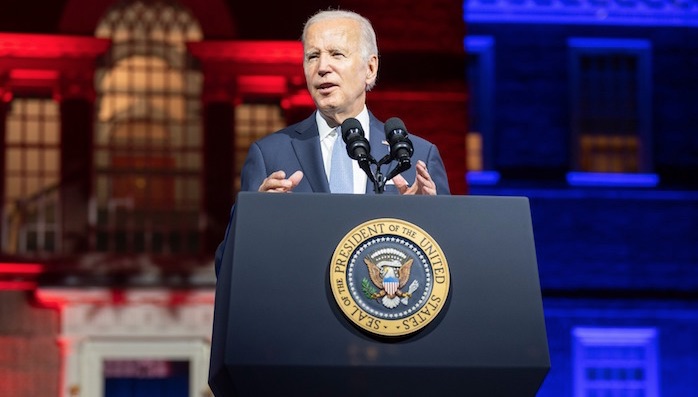 President Joe Biden on Wednesday said that democracy, which is generally defined as the capacity to have free and fair elections, is on the ballot. He also said election deniers are “destructive,” and “MAGA Republicans” support voter suppression.

President Joe Biden warned that democracy was in peril and on the ballot during a primetime speech Wednesday from Union Station in Washington, D.C., near Capitol Hill.

Biden referenced the Jan. 6, 2021 Capitol riot, and talked several times about former President Donald Trump. He also said that political violence is on the rise.

Biden professed that democracy, which is generally defined as the capacity to have free and fair elections, is on the ballot.

“We’ll have our difference of opinion and that’s how it’s supposed to be. But there is something else at stake. Democracy itself. I’m not the only one who sees it,” Biden said. “Recent polls have shown an overwhelming majority of Americans believe our democracy is at risk, that our democracy is under threat. They too see that democracy is on the ballot this year.”

A recent New York Times/Siena College poll found that 71% of Americans believed democracy faced some risk and that only 28% believed their votes would be properly counted. However, the Times story characterized the concern as “remarkably apathetic” compared to concerns about economic issues.

A majority of Republicans, 55%, said voting by mail posed a threat to democracy, but 72% of Democrats supported it. Fewer than half of independents, 48%, said mail-in voting presented no threat.

Overwhelmingly, 81% of those who think democracy is in danger believe it can be saved by existing laws and institutions without the need to go outside the law.

“It’s estimated there are 300 election deniers on the ballot all across America this year,” Biden said. “We can’t ignore the impact this is having on our country. It’s damaging, it’s corrosive, and it’s destructive.”

The number appears to come from a CBS News tally that says, “Indeed, more than 300 Republican candidates for state and national office have been identified by CBS News as ‘election deniers’ for having stated their refusal to accept the results of the 2020 presidential election as legitimate.”

A left-leaning think tank, The Brookings Institution, also had the same number.

However, Biden’s party, through the Democratic Congressional Campaign Committee, the House Majority PAC and the Democratic Governors Association, spent more than $43 million in Republican primary contests in nine states to help push candidates considered “election deniers” to the GOP nomination, Newsweek reported. The thinking was that these candidates would be easier to beat.

Further, it’s unclear whether denial of an election result is higher now than in the past. A 2017 Harvard Harris poll found that 68% of voters did not believe Democrats accepted Trump was legitimately elected president. The figure included 65% of Democrats who said this of their party. Meanwhile, 69% of Republicans and 69% of independent voters said Democrats had not accepted Trump as a legitimately elected president.

This came as his opponents, Hillary Clinton, frequently claimed without evidence that the 2016 election was stolen. A poll immediately after Trump’s win in 2016 found that one-third of Hillary Clinton voters did not believe his win was legitimate. However, that number later increased.

“They are trying to succeed where they failed in 2020, to suppress the right of voters and subvert the electoral system itself,” Biden said. “That means denying your right to vote and deciding whether your vote even counts. Instead of waiting until an election is over, they are starting well before it. They are starting now. They’ve emboldened violence and intimidation of voters and election officials.”

Biden wasn’t specific regarding how Republicans are suppressing and subverting voting. However, in the past he has been critical of election reforms.

Among the states Biden was most critical of was Georgia, which he referred to as “Jim Eagle,” or “Jim Crow 2.0.”

But Georgia has experienced soaring turnout this year for early voting, both in-person and absentee voting, compared to previous midterm elections. The turnout is almost on par with the early voting in the 2020 presidential election–which is unusual.

A national Gallup poll released Wednesday shows that 41% of Americans have already voted or plan to vote early, compared to 34% in 2018. CNN reportedthat more than 24 million votes were already cast across 46 states that allow early voting.

4. ‘No Election in History’

Biden asserted the 2020 election, in which he defeated former Trump, was the most certain in history because it endured numerous legal challenges in courts and numerous recounts across several closely-contested states.

If Biden meant recounts and court challenges did not reverse the vote count, that would be accurate. However, to say that no election in history was more certain is assuredly questionable.

In 2020, Biden carried 25 states in defeating Trump, as well as the District of Columbia.

Biden talked about the assault on Paul Pelosi, husband of House Speaker Nancy Pelosi, D-Calif., who was beaten in the head with a hammer by the attacker at their San Francisco home.

“We must with one, overwhelming, unified voice speak as a country and say there’s no place – no place – for voter intimidation or political violence in America,” Biden said.

The president said there is a rise in political violence.

“There’s an alarming rise in the number of our people in this country condoning political violence, or simply remaining silent, and silence is complicity,” Biden said.

An Ipsos poll in August found 85% of Americans disagree that it is acceptable for a member of their own party to achieve a political goal using intimidation or threats. So data doesn’t appear to show an upshot in public support for or acceptance of political violence.

During the riots during the summer of 2020, then-Sen. Kamala Harris, now Biden’s vice president, tried to help raise bail money for those involved in the riots.

If you’re able to, chip in now to the @MNFreedomFund to help post bail for those protesting on the ground in Minnesota. https://t.co/t8LXowKIbw

After the murder of George Floyd in Minnesota, protests in many cities turned into riots starting in May. Biden, however, did make references to the problem of violence, saying in early June 2020, “There’s no place for violence, no place for looting or destroying property or burning churches or destroying businesses.” He said in late May 2020: “Protesting such brutality is right and necessary. It’s an utterly American response. But burning down communities and needless destruction is not.”

However, during the presidential debate in 2020, asked about the militant group Antifa, Biden said, “Antifa is an idea, not an organization.”

Also, Biden did not speak out about the attempted assassination in June of Supreme Court Justice Brett Kavanaugh. However, eventually, Biden’s press secretary Karine Jean-Pierre said. “Any threats of violence or attempts to intimidate justices have no place in our society.”