By Nicolas Loris and Douglas Blair | The Daily Signal

A year ago this month, the “yellow vest” protests began in France. More than 300,000 men and women took to the streets of Paris, Lyon, and Toulouse dressed in bright yellow safety vests.

They marched largely in opposition to a proposed fuel tax, arguing that gas prices in France were already too high. A beleaguered President Emmanuel Macron attempted to justify his policy by explaining the tax was necessary to reach goals agreed to in the Paris climate accord.

The protesters didn’t care. They continued to march until both the proposed tax was defeated and they had Macron in political trouble.

Since then, the movement that haunted the French president has largely fizzled into obscurity. But on the one-year anniversary of the protests, we have an opportunity to reflect on the policies that the movement strove to implement, and where the yellow vests failed to make a real difference. 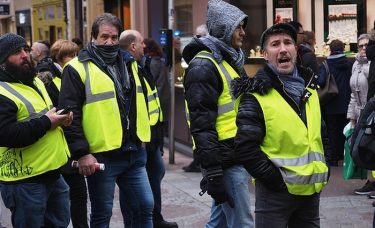 It is important to start with the context surrounding the protests.

In 2018, French drivers could expect to pay more than $6 per gallon at the pump. These high prices were a direct result of energy taxes used to fund infrastructure work and other government projects.

The fuel tax that sparked the protests was just another one of these taxes, but the rationale justifying it was new. Macron explicitly said the tax was a direct result of the Paris climate accord.

As one protester put it: “Fuel is already overtaxed and the increase was absolutely not going to pay for climate. That was money for the government’s pockets, and only a bit for climate.”

Yet herein lies the irony. As these protesters slammed the government for rising gas costs, they simultaneously called for increased government intrusion in the name of fighting climate change.

As one of us explained in a previous piece, the Paris climate accord “would have been as disastrous for the American economy as it is proving to be for those in Europe. Heritage Foundation analysts projected that this agreement would have raised energy prices, killed jobs, and cost the average family of four $20,000 by 2035.”

But the myth persists that the accord is the one and only way to save the planet. Interestingly, the anniversary of the yellow vest protests lines up with the United States’ recently announced formal withdrawal from the deal.

What the protesters have failed or refused to realize is that their stated goals are fundamentally incompatible with each other. The road to a government scheme to allegedly “fix” the climate is paved with higher taxes.

This is the crux of the problem. The Paris climate accord is a failure on multiple levels. It fails to please anybody and does far more harm than good.

The French are uniquely predisposed to bristle at higher fuel taxes because they are already one of the lowest emitters on the Continent. In fact, the datashows that the biggest emitters by far are the Chinese, who account for 27% of total global emissions.

But the accord fails here, too. The agreement is toothless, with nonexistent enforcement mechanisms and weak incentives for any country to actually try to follow the deal.

Developing countries are rightly prioritizing reducing energy poverty and will continue to increase their emissions well into the future. For these countries, the deal is all promises to meet nearly impossible expectations with no real action.

As the Natural Resources Defense Council, a pro-Paris accord group, states on its website: “No language is included on the commitments countries should make, nations can voluntarily set their emissions targets, and countries incur no penalties for falling short of their proposed targets.”

The yellow vest movement had lofty ambitions. The protesters saw an unfair tax being levied against them in the name of climate alarmism and rightly said “enough.” They then faltered because they failed to see the true problem.

If the protesters want competitive energy prices and less government control, they should follow the American example and push to leave the accord. Otherwise, they’ll be marching for many years to come.

One thought on “French protesters didn’t want Macron’s gas tax. They should reject his climate agenda.”