“A senior U.N. environmental official says entire nations could be wiped off the face of the Earth by rising sea levels if the global warming trend is not reversed by the year 2000.” 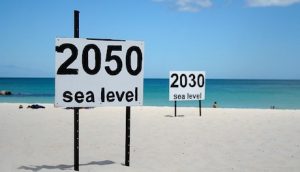 “Coastal flooding and crop failures would create an exodus of “eco-refugees,” threatening political chaos, said Noel Brown, director of the New York office of the U.N. Environment Program, or UNEP.”

It adds: “He said governments have a 10-year window of opportunity to solve the greenhouse effect before it goes beyond human control.”

As the warming melts polar icecaps, ocean levels will rise by up to three feet, enough to cover the Maldives and other flat island nations, Brown told the Associated Press in an interview.

“Coastal regions will be inundated; one-sixth of Bangladesh could be flooded, displacing a fourth of its 90 million people. A fifth of Egypt’s arable land in the Nile Delta would be flooded, cutting off its food supply, according to a joint UNEP and U.S. Environmental Protection Agency study.”

Well, 30 years have gone by since that outburst from a United Nations official, and 19 years since nations were supposed to disappear. Notice any missing nations?

This is just an early example of the hysterical hype fed to us by the UN and its climate bodies. When their scare stories don’t pan out, they just invent new ones.