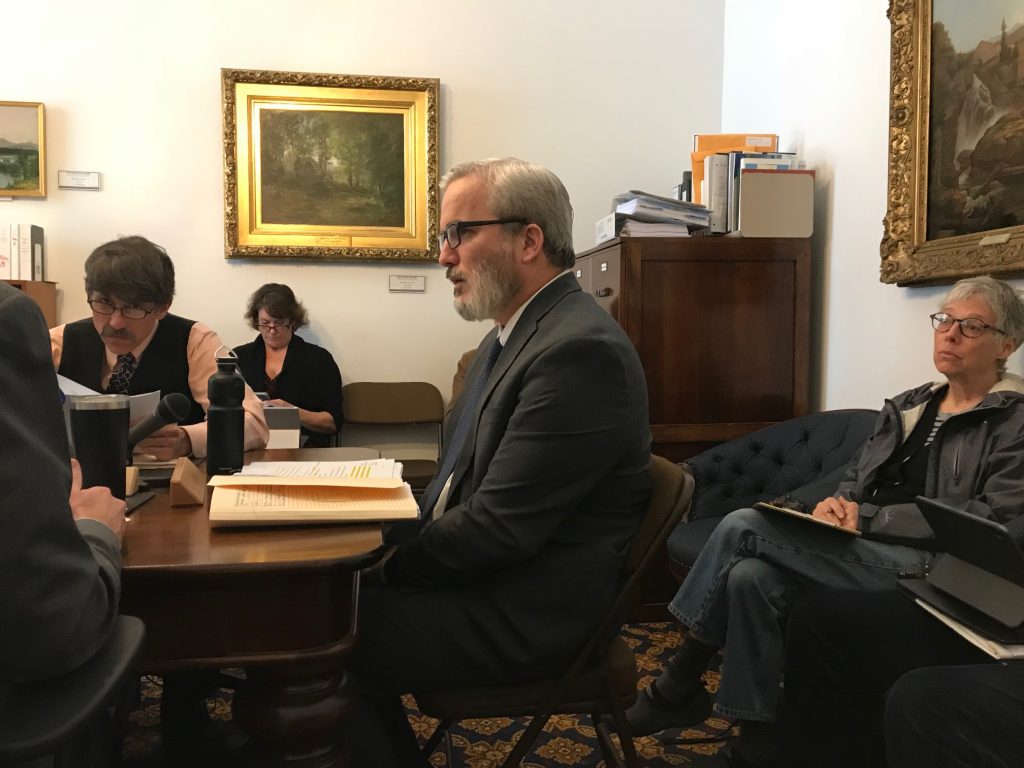 NO MORE THROWAWAY PLASTICS?: Michael O’Grady, counsel to the Legislature, reviews language in a bill that would ban single-use plastic bags and straws. He spoke at a meeting with the Senate Natural Resources and Energy Committee on Friday.

MONTPELIER — A ban on single-use plastic bags and straws was approved by a 4-1 vote of the Senate Natural Resources and Energy Committee on Friday morning.

The penalties per violation include a written warning for first offense, a $25 civil penalty for the second offense and a $100 penalty for each offense thereafter.

The legislation creates a single-use product working group of industry and government professionals who will make new recommendations as necessary. The working group would disband in 2020.

Straws can still be provided at food service restaurants, but only by request.

Bray told True North that eliminating plastic bag use in Vermont is the equivalent of taking 1,927 cars off the road, and it saves $13.2 million in costs to produce the bags.

The bill calls for a 10-cent fee for paper bags. Sen. Corey Parent, R-Franklin, the lone vote against the bill, questioned how the state can enforce that stores charge this fee to their customers.

“They are already charging for the bag in the cost of the product,” Parent said.

Bray noted that the Retail and Grocers Association had requested such a fee. He also noted that ultimately nudging customers to use reusable bags is the final solution.

Sen. John Rodgers, D-Essex-Orleans, said the bill is another example of punishing those who have more responsible habits for the actions of those who are wasteful. He said his family reuses their plastic bags multiple times.

“Some of them do get used a whole bunch of times, and when they are at the end of their life we recycle them,” he said. “What we are doing again is legislating to the lowest common denominator, for the people who don’t reuse and recycle them.”

Michael O’Grady, deputy chief counsel from the Office of Legislative Council, reviewed the bill before the vote.

Most concerns regarding plastic bags pertain to the fact that they are non-biodegradable. Rodgers explained the difference between compostable and degrading.

“Degrading means it’s just gonna break down into smaller pieces, it doesn’t necessarily turn back into real earth material,” he said. “Compostable means it will break down [into each material].”

According to the Denmark-bases sustainability website theworldcounts.com, even when plastic bags do finally break down they continue to hurt the environment.

“Plastic bags remain toxic even after it breaks down,” the site states. “It doesn’t biodegrade, it photo-degrades. It means that after it degrades, it breaks down into smaller and smaller toxic bits of itself — and bleeds and contaminates the environment.”

A lot of plastics are ending up in the oceans, according to ecowatch.com.

“In the Los Angeles area alone, 10 metric tons of plastic fragments — like grocery bags, straws, and soda bottles—are carried into the Pacific Ocean every day.” the group’s report states.

The same report cites a phenomenon called “The Great Pacific Garbage Patch.” This is an area of ocean surface twice the size of Texas littered with floating plastics located in the North Pacific Gyre off the coast of California.

Meanwhile, town by town, communities in Vermont are already making the move away from plastic. On Town Meeting Day, 84 percent of Burlington residents voted to advise City Council to ban single-use plastic bags from stores. South District councilwoman Democrat Joan Shannon pushed the effort to get the resolution onto the ballot.

Last year, Brattleboro implemented a similar ban which has been in place since July 1. Some local stores are already selling reusable bags to accommodate the new rule.

As news gets around that these plastics are to be banned, environmentalists are calling for other materials to likewise be banned.

Rather than take baby steps with plastic bags and straws, Vermont should ban petroleum-based Fleece from the entire state and make people wear Wool. #KindofSerious https://t.co/2o5HwoJk40