Multiple anti-carbon tax groups are partnering in an effort to boycott Vermont companies whose CEOs are supporting a carbon tax in the Green Mountain State.

Citizen groups 802VT Alliance and No Carbon TAX Vermont are calling for the boycott ahead of a planned rollout of a letter-writing and telephone campaign. 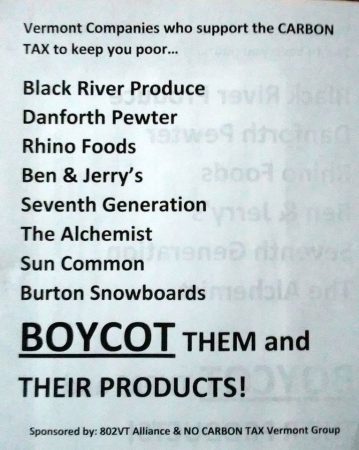 A call for a boycott of Vermont companies by several anti-carbon tax groups in Vermont.

The boycott was started using a meme on 802VT Alliance’s and No Carbon TAX Vermont’s Facebook pages. The meme is being shared on Facebook via individual members and supporters of the two groups.

“When we read about this group of Vermont CEOs supporting a carbon tax here — these are Vermont companies doing business in Vermont and depending upon Vermont people for at least part of their income — we asked why they would cut their own throats and back a carbon tax,” John de Bruin, founder of 802VT Alliance, told TNR.

The CEOs of the seven companies held a news conference at the Vermont Statehouse on Feb. 20 to urge Gov. Phil Scott and the mostly Democratic/Progressive state Legislature to pass a comprehensive climate action package this session.

At the media event sponsored by the Vermont Businesses for Social Responsibility, the CEOs said they want the state to move away from fossil fuels and embrace local renewable energy. Their support of the tax was explained as a way to offset the economic impact of the climate crisis and the possibility of Vermont losing its “green state” status.

802VT Alliance’s de Bruin, a resident of Danby, said that when he and J.T. Dodge of Newberry, founder of No Carbon TAX Vermont, learned that some legislators want to give the companies “financial kickbacks and incentives” to support the tax, they decided a boycott was needed to call attention to the collusion.

“They did this so they wouldn’t have to pay their share of a carbon tax,” de Bruin said. “Right there, they put themselves in a situation where they showed they care more about their profits and not their customers.”

De Bruin said that “100 percent” of his membership expressed support of the boycott, and that many are sending letters to the CEOs at their addresses. He added that group members are puzzled as to why corporate leaders would support a tax that would hurt their businesses and customers.

“Logically, you wouldn’t think these company CEOs would support a carbon tax,” de Bruin said. “Their transportation costs are going to go up. Their trucks deliver produce, merchandise to various locations.

As an example, he said the expenses for Black River Produce could potentially double in Vermont, and that costs would get passed on to consumers.

While boycotts have become the most visible means by which consumers express their views to company executives they disagree with, it’s unclear what steps make for an effective boycott.

J.T. Dodge, of No Carbon TAX Vermont, said his membership is non-partisan and most members support a boycott of the companies.

“No Carbon TAX Vermont supports the boycott of the announced corporations, as they are promoting and supporting the carbon tax schemes which include a carbon dioxide cap and trade,” Dodge told TNR. “Many of these organizations are owned by large foreign multi-national billion-dollar corporations — for example, Seventh Generation authored the Essex carbon tax scheme. Seventh Generation, as well as carbon tax promoters Ben & Jerrys, are both owned by Unilever. We haven’t yet listed Green Mountain Power [as part of the boycott], but we do consider them a large billion-dollar foreign corporation, as it is owned by Quebec’s Gaz Metro.”

“Working class Vermonters already struggle with the price of living here,” Dodge noted. “Our group is against making their lives more challenging.”

According to de Bruin, several legislators, are working hand-in-hand with the green corporation CEOs and are advancing a draconian anti-fossil-fuel agenda without much public or other commercial input.

“What irked me is that House Transportation Committee member Rep. Rebecca White (D-Hartford) is pushing for this carbon tax, too,” de Bruin said, noting that the legislator was a former community organizer for SunCommon, a green energy company and strong supporter of the carbon tax idea.

“Her company stands to profit from the carbon tax because she’ll sell more solar panels. It’s a conflict of interest, she should have bowed out in the first place,” de Bruin added.

While no carbon tax bills have been officially introduced in the House, lawmakers have drafted various ideas. In February, House Speaker Mitzi Johnson, D-South Hero, said it was too late to introduce carbon tax legislation this year.

Reaction to the planned boycott got thumbs up on Facebook from several individuals who follow de Bruin’s and Dodge’s efforts.

Donna Boutin, of St. Albans, wrote on 802VT Alliance’s Facebook page: “I haven’t supported B&J’s in over 30 years. My husband, back 30-plus years ago, called them ‘f— liberals’; the main reason was they were against the military. As for the others: never did business with them, don’t plan on it either.”

Another 802VT Alliance supporter, Michael Ferraro, of Castleton, wrote, “Done. Even if they (the seven CEOs) change their tune — done.”

True North reached out to several of the businesses named in the boycott for comment, but none responded at press time.

De Bruin said his call for the boycott was an easy decision to make.

“Nobody likes to get taken for a ride,” he said. “I think the boycott will have enough of an effect so that some of these companies may say ‘let’s not back this plan anymore’; that’s the ultimate goal of what we’re hoping for.”