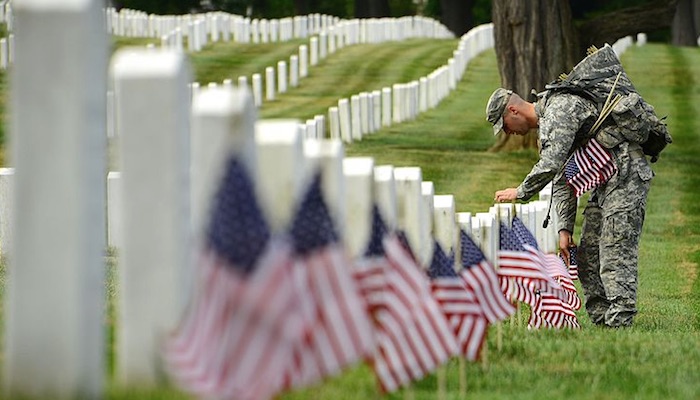 As part of the “Flags In” tradition, U.S. Army Sgt. Titus Fields, an infantryman with the Honor Guard Company, 3rd U.S. Infantry Regiment (The Old Guard), places an American flag in front of a grave stone in Arlington National Cemetery, Va.

By Brad Wenstrup | The Daily Signal

“What are you doing to celebrate Flag Day?”

It’s a question you probably won’t hear in the checkout line at the grocery store or around the dinner table with friends this week.

That’s because, unlike other hallmark holidays of summertime — Memorial Day, Fourth of July, Labor Day — Flag Day isn’t always celebrated with grand gestures, gatherings, or parades. More often it passes by with perfunctory commemorations at best. At worst, it is all but forgotten.

Yet it wasn’t meant to be that way. When Congress approved and President Harry Truman signed the national observance of Flag Day into law on June 14, 1949, it was for an important reason: “It is our custom to observe June 14 each year with ceremonies designed not only to commemorate the birth of our flag,” Truman said, “but also to rededicate ourselves to the ideals for which it stands. This beloved emblem, which flies above all our people of whatever creed or race, signalizes our respect for human rights and the protection such rights are afforded under our form of government.”

Truman’s words cut right to the heart of this holiday. Our flag is far more than fabric stitched together in stars and stripes. She is a tangible symbol of our national identity, reminding us of who we are, and how far we’ve come.

I wrote a salute to “Old Glory,” which hangs on the wall in my office in Washington, D.C. In part, it reads:

Today, as we pledge our loyalty to this flag,
Think about what she has stood for, think about where she has been.

From the home of Betsy Ross, to the streets of Concord, to the fields of Gettysburg.
From the rocks of Iwo Jima, to the Tundra of Korea, to the jungles of Vietnam,
And the deserts of the Middle East.

She has stood in your front yards, and she has stood on the moon.
She has been sadly placed over coffins, and proudly raised at the Olympics.

This is our flag—a symbol revered and cheered for. Battled and bled for. Both an embodiment of the collective struggles and triumphs of a nation over centuries and a symbol of the individual sacrifice of each man or woman who has fought and died beneath her stripes and stars.

In my district, there was an installation of 1,000 flags placed across 10 acres at Arlington Memorial Gardens in Springfield Township, Ohio, for Memorial Day this year. It was called the “Field of Memories.” 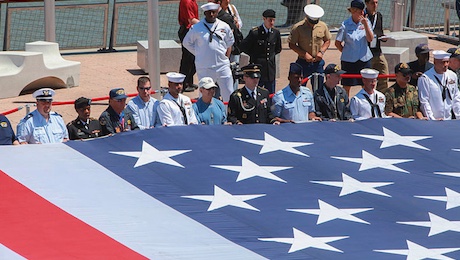 U.S. Service members and veterans gather around a U.S. flag during a Memorial Day celebration.

Visible from the highway, each flag was dedicated to a former or active military member, but the 3 feet by 5 feet pieces of fabric also represent a lifetime of memories. Birthdays missed. Joyful reunions after long deployments. Inside jokes shared over the phone across continents. Moving trucks headed to the next base, in the next state. The empty chair at the table. The memories of a single life, and a nation’s life, all stitched into one red, white, and blue emblem.

We don’t just honor our flag — it is also itself a symbol of the utmost honor. On the Thursday evening before Memorial Day, every available soldier in the U.S. Army’s Old Guard walks the rows of more than 228,000 headstones in Arlington National Cemetery, placing an American flag one foot in front of each grave marker with perfect precision. Throughout the weekend, the Old Guard will stay in the cemetery, making sure a flag remains in front of each grave.

This national tradition is called “Flags In” and has been conducted every year since 1948. It is more than a bright display — it is 228,000 distinct reminders of why these men and women gave their lives in the struggle for a more perfect union, and a more free world.

Each flag is a small but powerful statement that this field of memories does not lie forgotten. The freedom that these Americans fought for, and that our flag stands for, lives on.

This week, on Flag Day, Democrats and Republicans will gather on one field to play ball in the annual Congressional Baseball game in Washington, D.C. This is an event where for one night, both sides come together for charity, putting political differences aside and playing under one flag. It is a fitting moment to “rededicate ourselves to the ideals for which it stands,” as Truman said so many years ago.

I hope that’s what you think of when you see our flag flying this week, and every week. I hope you join me in taking a moment to pause and honor her — to ponder the magnitude of what she represents. The tribute that I wrote to our flag finishes likes this:

She flies through the air. She sails across the sea. She marches over the land.

She has stood for freedom in places around the world,
Until freedom could stand,
On its own two feet.

Evildoers have feared her,
Those in need have prayed for her arrival.
She has always stood for exceptionalism,
And for that we do not apologize.

Whether you honor her by raising her in your own front yard or visiting a veterans’ cemetery, by reciting the Pledge of Allegiance or singing the Star Spangled Banner, this week, please join me in honoring our grand United States flag, and all she represents.

One thought on “Flag Day: The meaning of the Stars and Stripes”