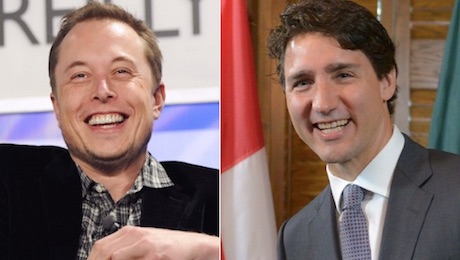 “It would appear that the so-called ‘fringe minority’ is actually the government,” Musk wrote in a Sunday tweet replying to a video showing the a large crowd of people in Ottawa protesting the mandates.

Trudeau had criticized the protesters in remarks Wednesday, decrying their views as “unacceptable” and categorizing them as a “small fringe minority,” according to CTV News. The convoy, which reportedly consists of tens of thousands of truckers opposing the country’s COVID-19 restrictions, prompted Trudeau to move to a secret location Saturday, CBC reported.

“The small fringe minority of people who are on their way to Ottawa who are holding unacceptable views that they are expressing do not represent the views of Canadians who have been there for each other, who know of that following the science and stepping up to protect each other is the best way to continue to ensure our freedoms, our rights, our values, as a country,” Trudeau said, CTV News reported.

“If the government had the mandate of the people, there would be a significant counter-protest. There is not, therefore they do not,” Musk responded.