A significant number of Hispanic women are poised to represent the Republican Party in Texas as congressional candidates in the upcoming midterms, creating a potential nightmare scenario for Democrats as they attempt to reverse GOP gains. 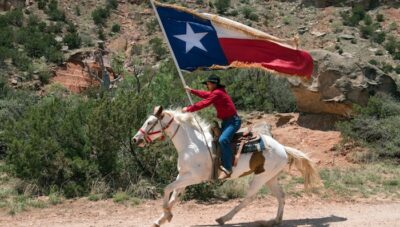 Alcazar cited the massive amount of illegal immigration in Texas as another reason Hispanics are turning towards the GOP, as inhabitants near the border, particularly mothers, no longer feel safe.

Four Hispanic women have already won their respective GOP primaries, while two others made it to a runoff that will be held in May. Three of them, Mayra Flores, Monica de la Cruz and Cassy Garcia, have the potential to become the first Hispanic women and the first Republicans to represent South Texas in Congress.

Hispanic female candidates and party officials told the Daily Caller News Foundation the development is a result of the demographic realizing their values align with the Republican Party.

Garza said she has never liked “identity politics” but acknowledged it was remarkable to see the “domino effect” of conservative women entering the political arena.

“I’m not shocked that they’re Hispanic, but I guess when you sit down and you really think about it, my gosh, they’re all female, they’re all Hispanic,” she said. “It’s really because America’s been put last and people are seeing that and saying ‘Hell no, we need to do something about this.’”

President Joe Biden severely underperformed with Hispanics across the country in the 2020 presidential election and the GOP has stepped up its efforts to capitalize on their gains. The Wall Street Journal released a poll in December that found Hispanic voters are now evenly split between both parties.

Claudia Alcazar, chair of the Starr County Republican Party, attributed the rise of Hispanic women in the GOP to a “new generation” that is “coming out of the closet” as conservative and feels empowered to speak out.

Garza and Alcazar are two of the four Hispanic women chairing the Republican Party in the Cameron, Hidalgo, Starr and Zapata counties, all of which lie along the southern border.

“We’re the mothers … we’re the ones who raise our children and we’re not happy with all this stuff that’s going on through Critical Race Theory and all that stuff just doesn’t alight with our views as Christian women,” Alcazar said. “So yeah, we’re getting more involved. Absolutely.”

In Texas, the Republican National Committee has established Hispanic Community Centers to bring in more voters, setting up in Laredo, McAllen, San Antonio and Houston.

Flores, who is campaigning to represent Texas’ 34th Congressional District, told the DCNF that she was glad the Republican Party was finally investing in the Hispanic community after the presidential election showed the demographic had potential.

She said Hispanic Americans now understood their similar belief systems with the Republican Party on issues such as religion, abortion, and family.

“I was born in Mexico, raised with strong conservatives values. I love my traditions, love my culture, love my roots and I think that we should never forget that,” Flores said. “Our values in the Hispanic community are just beautiful and I just want to make sure that our values don’t die and I just feel that … the Democratic party is … fighting against those values.”

“It’s the breaking of the family that is so important and dear for us Latinos and we came here, not only to have a better life but to have a better life for our children,” Carmen Maria Montiel, who is running to represent Texas’ 18th Congressional District in Houston, told the DCNF. “The way that things are going, that’s not going to happen. We’re becoming more and more like the countries that we left.”

Alcazar cited the massive amount of illegal immigration as another reason Hispanics are turning towards the GOP, as inhabitants near the border, particularly mothers, no longer feel safe.

“We find paraphernalia of people crossing through my yard and it’s scary to me,” she said. “I don’t believe they’re doing enough.”

Flores will compete in a special election in June due to Democratic Rep. Fileman Vela’s retirement from the seat on Thursday. She said it was necessary for the GOP to have Hispanic representation in order to secure the community’s votes.

“They also need someone that looks like them,” she said. “That … knows what it’s like to live among them.”

Montiel concurred, arguing that, while former President Donald Trump was successful in rallying the Hispanic vote, the GOP would be even more successful with Hispanic candidates.

“I’m very proud of all of my colleagues, Latina women that are running for office,” she added. “I hope more women will join us in this fight because we understand what this takes.”