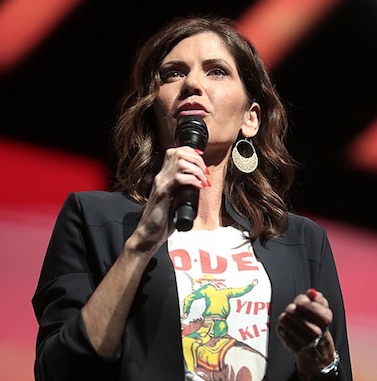 Noem signed Executive Order 2022-02 which bans the teaching of “inherently divisive concepts.” The order lists Critical Race Theory (CRT) as “a political and divisive ideology that teaches a distorted view” of the U.S. and its institutions.

“[CRT] compels students to view the world though a purely racial lens and to judge others based on the color of their skin rather than the content of their character,” the executive order states. “The inherently divisive concepts that underlay Critical Race Theory have no place in our classrooms.”

CRT holds that America is fundamentally racist, yet it teaches people to view every social interaction and person in terms of race. Its adherents pursue “antiracism” through the end of merit, objective truth and the adoption of race-based policies.

“Political indoctrination has no place in our classrooms,” Noem said in a press release announcing the executive order. “Our children will not be taught that they are racists or that they are victims, and they will not be compelled to feel responsible for the mistakes of their ancestors. We will guarantee that our students learn America’s true and honest history – that includes both our triumphs and our mistakes.”

Political indoctrination has no place in our classrooms. I signed an Executive Order today to block Critical Race Theory at K-12 public schools in South Dakota.

“Inherently divisive concepts” are defined in the order as anything that advances “ideas in violation of the Civil Rights Act of 1964,” such as claims that individual’s race, color, religion, sex, ethnicity or national origin make them inherently superior or inherently racist.

The executive order states the Department of Education (DOE) can’t compel employees, students or teachers “to personally affirm, adopt, or adhere to inherently divisive concepts.” The state’s Board of Education must also ensure that its Content Standards don’t promote any restricted concepts.

Noem’s order also tasks the Secretary of Education and the DOE with reviewing policies, materials and trainings within the department that might promote “inherently divisive concepts,” which, if discovered, must end or be removed by Oct. 1.

On March 28, Noem signed HB 1012, which bans mandatory CRT trainings and orientations at colleges in South Dakota. She also signed Executive Order 2021-11in July 2021 which blocked certain federal civics and history grants over concerns that they had ties to CRT.