Voters around the country head to the polls Tuesday to vote in a range of races, with dozens of governors’ seats and control of the U.S. House and Senate hanging in the balance.

President Joe Biden has ratcheted up the rhetoric in recent weeks, repeatedly claiming “democracy is on the ballot” in these midterm elections. 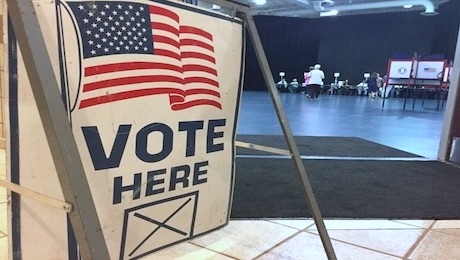 The poll found that 80% of voters named the economy as a top issue with 77% specifically pointing to inflation, which is at the highest level in four decades. The poll found voters trust Republicans more on the economy as well as crime, another leading issue right now.

“So, today, I appeal to all Americans, regardless of party, to meet this moment of national and generational importance,” Biden said in a speech from Union Station in Washington D.C. last week.

But polling suggests voters are less concerned about those threats over democracy and more focused on the economy.

An ABC News/Washington Post poll released Sunday found that economic issues – including inflation, recessionary fears and an unstable stock market – are by far the most concerning for voters.

The poll found that 80% of voters named the economy as a top issue with 77% specifically pointing to inflation, which is at the highest level in four decades. The poll found voters trust Republicans more on the economy as well as crime, another leading issue right now.

The poll found Democrats are more trusted on abortion, an issue that surged in importance following the U.S. Supreme Court’s overturning of Roe v. Wade. Since then, though, abortion has faded with fewer Americans energized to make it a top priority in their vote.

With that elevated inflation and high gas prices, Republicans have ridden a wave of discontent over the economy this election cycle.

“Everything is trending toward a Republican takeover of both chambers of Congress,” said Colin Reed, a Republican strategist, former campaign manager for U.S. Sen. Scott Brown, R-Mass., and co-founder of South and Hill Strategies. “If the GOP does regain control, voters will expect them to deliver where the current leaders haven’t: tackling inflation, reducing the costs of energy and restoring a sense of confidence that is sorely missing right now.”

At the same time, a frantic news cycle has preceded Tuesday’s vote. Among the recent news has been the takeover of Twitter by billionaire Elon Musk, who has laid off droves of staff and announced the company will embrace a more free speech friendly approach to content moderation. Musk waded into the midterm waters Monday, calling outright for Americans to vote Republican.

“To independent-minded voters: Shared power curbs the worst excesses of both parties, therefore I recommend voting for a Republican Congress, given that the Presidency is Democratic,” Musk wrote. “Hardcore Democrats or Republicans never vote for the other side, so independent voters are the ones who actually decide who’s in charge!”

Real Clear Politics’ polling projects Republicans will pick up three Senate seats, three governorships and about 31 House seats. RCP has Republicans up 2.5% on the generic ballot. A Yahoo News-YouGov poll released Thursday has Democrats up by 2%.

This year’s midterm elections put several key issues up for grabs, including several-trillion dollars in congressional spending that kicked off during the pandemic and pushed the federal debt to more than $31 trillion this year.

On top of that, Republican lawmakers have laid out dozens of investigations since Biden took office on a range of topics, from federal funding of the controversial Wuhan lab some say was the origin of the COVID-19 virus, Dr. Anthony Fauci’s role in the pandemic, the Department of Homeland Security’s increasingly aggressive censorship efforts with big tech, Hunter Biden’s affairs, and more. If Republicans win a majority, their investigations will have teeth.

Republican control would also complicate judicial nominations for Biden, one of several key issues up for grabs this election day.

Polling, however, shows that by Tuesday, many Americans had already voted. As The Center Square previously reported, Gallup released polling data earlier this month which found far more Americans are voting early these midterms than the midterm elections in years past.