By Gillian Richards | The Daily Signal

While most progressive candidates lost to an incumbent in this year’s Democratic primaries, progressives won over half of the open-seat races.

One study found that progressive candidates received many high-profile endorsements, including from Sen. Bernie Sanders (I-Vt.) or Rep. Alexandria Ocasio-Cortez (D-N.Y.). They also enjoyed support from one or more of the following groups: Indivisible, Justice Democrats, Our Revolution, Sunrise Movement, or The Progressive Change Campaign Committee (PCCC).

Here are 10 progressive-backed candidates to look out for in Tuesday’s midterm elections:

Vermont state Senate President and Majority Leader Becca Balint won the Democratic primary for Vermont’s At-Large Congressional District in August. Sen. Bernie Sanders and Our Revolution are among the progressives backing her in the midterm elections. 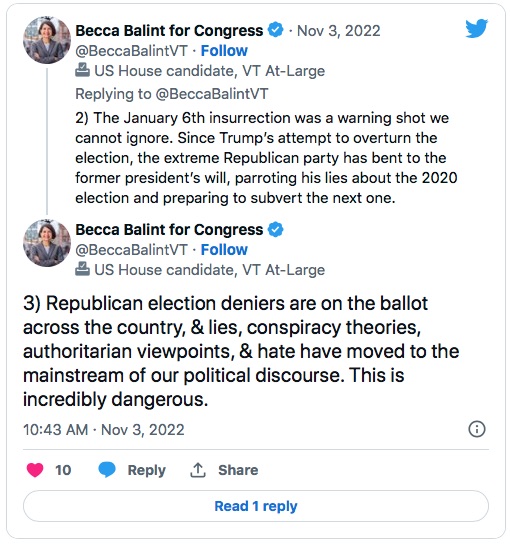 Sen. Balint’s previous initiatives in Vermont include banning “conversion therapy” for LGBT youth and backing a transgender bathroom bill in the senate. Her current goals include supporting the federal Equality Act, codifying abortion into federal law, and supporting a Green New Deal to fight climate change.

Among Casar’s policy priorities are Medicare for All, tuition-free higher education, and the legalization of marijuana.

Medicare for All. Tuition-free higher education. Legalizing marijuana. Repealing all "right-to-work" laws. Passing the PRO Act. TEXAS: this is what we can achieve when you show up and VOTE to send @GregCasar to the U.S. Congress. pic.twitter.com/pwjsU3Z899

Casar’s other policy goals, as stated on his website, include increasing access to abortion in Texas. Casar previously passed amendments to fund abortion travel costs in The Lone Star State. His campaign website states he “is dedicated to increasing access to reproductive health care, repealing the Hyde Amendment, and codifying Roe v. Wade through the Women’s Health [Protection] Act.”

“Together, we’re taking our fight to the halls of Congress — to fight and deliver on passing Medicare for All, protecting reproductive rights, creating good jobs and fixing our power grid,” Casar said to at a viewing party in March. “Progressive policies are popular, and we’re going to pass them for Texas working families,” he added.

“As the first generation-z member of Congress, from day one, I will fight to end gun violence, win Medicare For All, transform our racist criminal justice system, and end the climate crisis,” Frost states on his campaign website.

Gun violence is an everyday occurrence, the Supreme Court has stripped away abortion rights, & affordable housing is in a crisis. We need bold leaders who will fight for transformational change. A leader who will fight for Orlando. pic.twitter.com/Mkc0JnFxsb

Frost did not respond to The Daily Signal’s request for comment by publication.

For reviews of all 10 progressive candidates, read full article here at The Daily Signal.

3 thoughts on “10 progressive, Bernie-endorsed candidates to watch in midterm races”