On Thursday, about 40 people attended an online public hearing on the Chittenden Solid Waste District’s request for two permits described by some public commenters as “after-the-fact permits” to legitimize the alleged illegal dumping of at least 2,100 tons of glass into a closed landfill in Williston.

Among those in attendance were eight Agency of Natural Resources officials, including individuals and organizations who have historically been at odds.

During the meeting, ANR representatives who ran the meeting said they cannot comment on the alleged glass-dumping incident because it is currently under investigation by Vermont Attorney General’s office, where it’s been for over a year and a half.

In spring of 2018, ANR staff inspected the district’s site in Williston and saw a pile of crushed glass about 80 feet wide and 100 feet long by 40 feet high. The disposal constituted a potential violation of Vermont’s solid waste law. 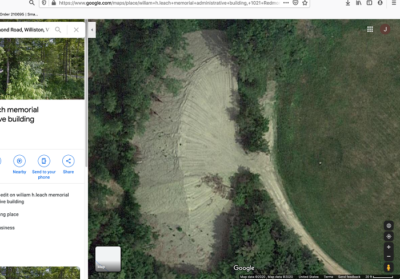 PILE OF GLASS: John Brabant, the regulatory affairs director for Vermonters for a Clean Environment, says this may be an image from Google Earth of a massive illegal dumping of crushed glass on the property of the Chittenden Solid Waste District.

At the hearing Thursday, John Brabant, the regulatory affairs director for Vermonters for a Clean Environment and a former employee at ANR, shamed the Agency of Natural Resources for what he described as unprecedented disregard for regulatory protocols.

“There’s no precedent … any time, anywhere, of ANR allowing an applicant without the agency to slice open, push off a drainage layer, push off a topsoil layer, and slice open a synthetic cap without agency oversight and then wave to have engineers sign-on. This is shameful,” he said.

According to Brabant, the permits being sought amounted to after-the-fact approval of CSWD’s 2012-2013 removal of their closed landfill’s soil, drainage layer, and synthetic cap system, as well as the unpermitted disposal of 2,186 tons of off-specification, processed glass waste.

ANR’s representative tried to defend its approach by referring to topsoil erosion caused by Tropical Storm Irene at other closed municipal landfills in Vermont that were repaired without seeking prior ANR authorization.

Brabant said he was disappointed in CSWD.

“This is painful knowing that every single bottle that I recycled, every single one which I know went to CSWD, was dumped over the bank or dumped in this landfill or dumped at that compost facility, and here we are moving forward as if that’s not a big deal,” he said. “Why do we have these programs if they are not going to be taken seriously? This is a big deal.”

Another commenter at the hearing was Marie Thomas, a resident from Chittenden County who used to work for the Army Corps of Engineers. She said these kinds of actions would never be tolerated under her watch.

“The Chittenden Solid Waste District should be a very professional organization, they should be aware of everything,” she said. “And they should not be let off the hook; there needs to be some kind of penalty or post-monitoring or something. You can’t just let people get away with doing things without speaking.

” … A lot of us work very hard to do the right thing by the environment and we need to trust them. And right now, this on top of some other things they have done, I don’t have a lot of trust in them.”

“My thought is it would make sense, particularly when there is potential litigation at play, to wait until that decision is made about an enforcement action before moving on the permit,” he said.

Maeve Power, from Burlington, who works with VPIRG, commented as well.

“I also oppose like everybody else here giving CSWD permits for what seems to be an act of illegal dumping,” she said. ” … it’s pretty unacceptable for Vermont’s laws to be broken and for there to be no consequences.”

Patrick Austin, from Charleston, who is on the board of the NEK Solid District as well as the Charleston Select Board, said the two permits should never have been given any consideration.

Chuck Schwer, director of ANR Waste Management division, confirmed that the case was sent to the attorney general’s office.

“The agency obviously felt very strongly about the things you are saying because we sent it to the attorney general’s office,” he said.

Images courtesy of state of Vermont and Google Earth