Republicans in the Vermont House of Representatives need eight more seats to reach the 51 necessary to sustain a governor’s veto.

The Legislature’s 103-vote override of Gov. Phil Scott’s veto of the Global Warming Solutions Act has become a campaign rallying cry. Or rather, a warning: a vote for Scott and the Democrat/Progressive incumbent means the popular centrist Republican won’t be able to turn off the spigot on the endless flow of expensive, big government legislation.

While Republicans hope the Scott race car can draft them across the finish line, candidates in many “red” districts might get a strong Trump bump from behind.

Donald Trump won 60 Vermont towns in 2016. In 30 others he came within 10 points of victory. Trump almost certainly won’t win Vermont this year, but some signs point emphatically to a stronger finish — one with possible legislative consequences. 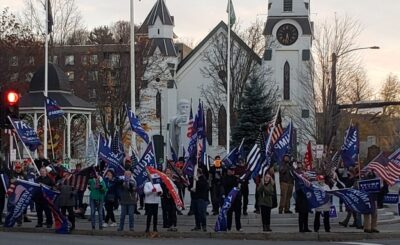 Four years ago Trump won just 30% of the Vermont general election vote. He barely won the primary with just 32%. This year he demolished the primary field with 87%, despite credible competition from former Massachusetts Gov. Bill Weld, who predicted he would do well here, and opposition from Gov. Scott.

Four years ago he won just one county — tiny Essex in the Northeast Kingdom. This year even elected opponents think he also will win NEK neighbor Orleans County.

Four years ago Vermont third party voters on the Libertarian right comprised 3.2% of the voters, compared to the leftist Green Party’s 2.1%. This year no one is predicting a significant third party vote of any kind.

Perhaps most important, four years ago Trump had virtually no campaign on the ground. This year, what a difference! Unpaid, politically-inexperienced loyalists — emphasis on the root word “loyal” — with virtually no support or direction from the party infrastructure have staged dozens of enthusiastic flag-waving rallies in city parks, roadsides and miles-long vehicle caravans called “Trump trains.”

This is a true grassroots political movement. There are few Republican “regulars” standing in their midst. The GOP establishment has contributed next to nothing to this phenomenon. The main organizer of the Barre group is a politically-unknown, 30-something, blue-collar operator of a small local business. He and the other regulars at the Friday rallies identify more as (variously) patriots, Second Amendment supporters, pro-lifers and nothing-in-particulars. They are all clearly over the moon about President Donald J. Trump.

Last Friday my wife and I had dinner with a Chittenden County GOP leader at the Cornerstone. She told us ruefully that an all-candidates sign wave had attracted only about a dozen people, mostly candidates and party stalwarts.

Yawn. Par for the course for 2020 statewide races. VT Digger columnist Jon Margolis, a colleague of the great Chicago columnist Mike Royko, wrote yesterday: “The candidates, their immediate families, their campaign staffs, devoted partisans, and fervent ideologues have grave concerns about whether Republican Gov. Phil Scott is re-elected or is ousted by Progressive/Democratic challenger David Zuckerman. That entire assemblage could probably fit into the grandstand at Centennial Field, the Vermont Lake Monsters home park, which seats 4,415 baseball fans or political junkies.”

But that’s not the whole story. As we dined, more than 100 people across the street in Barre City Hall Park were cheering, waving Trump signs and American flags, and receiving mostly approving honks and a few upraised middle fingers. By contrast, a block away, a motley handful held anti-Trump (but not pro-Biden) signs.

If Trump and Scott — both now at their most popular in Vermont — can both win towns lost in 2016, these towns could go “red” for House candidates, too. If every Republican incumbent wins and if eight districts get a big enough Trump/Scott boost, the GOP House caucus will be able to sustain a veto and derail at least some of the majority’s initiatives.

These House races may be in play:

This year, the local GOP has attacked Johnson with full-page ads in the local newspaper for pushing the Global Warming Solutions Act. Opponents of marijuana legalization bills that passed on Johnson’s watch also have been vocal in print. A Trump supporter raised a Trump flag on the Sand Bar flagpole separating South Hero from Milton. Will all of these factors push 150 votes away from Johnson? We’ll know tonight.

And speaking of Barre – in 2018, Republican John Steinman finished third in the two-seat district by 200 votes. He and Karen Lauzon – wife of former mayor and longtime Barre businessman Thom Lauzon – are chasing two Democrat incumbents this year. The Barre rally energy and networking could help both – although more likely Steinman – net a seat. Lauzon stands to benefit most from Scott’s coattails.

Up in the Northeast Kingdom Albany-Irasburg seat, Democrat Rep. Sam Young isn’t running again. He’s the same Democrat who predicted Orleans County will go for Trump this year. Longtime local official Jeannine Young hopes to join fellow Republican and longtime incumbent Vicki Strong in the State House. They face a stiff challenge from non-profit organizer Katherine Sims, who has been the beneficiary of generous media attention.

In the Rutland County two-seat, three-town district of 2016 Trump-red Pittsford and Clinton-blue Brandon and Sudbury, Republican Dave Soulia is taking aim at the seat held by Democrat Kitty Jerome. That’s a race to watch tonight, as are at least two others in Rutland County.

Sherri Prouty will seek to return the Rutland City 5-4 district to its historic Republican status by defeating one-termer Bill Notte. The five-town Rutland/Bennington district including Middletown Springs, Rupert, Pawlet, Rupert, and Tinmouth went ever-so-slightly for Clinton in 2016. There Progressive Robin Chesnut-Tangerman faces a challenge from Republican upstart Sally Achey. Chesnut-Tangerman was involved in a primary night kerfluffle when he looked into a ballot bag – allegedly a violation of state law.

In the Vergennes-Ferrisburg-Panton-Waltham-Addison town seat, former radio personality and farm advocate Tim Buskey and politically-active retiree Steve Thurston are the GOP challengers for Matt Birong (P) and Diane Lanpher (D). The city government of Vergennes, the largest community, was embroiled in a police-defunding, pro-BLM controversy this summer. Historically a district with at least some Republican representation, Addison-3 is unlikely to swing over to Trump. Four of five towns went decisively for Clinton in 2016. But in the volatile political environment there, even a modest Trump Bump could matter.

The races mentioned above could represent a 10-vote pickup for the GOP House. Other possible pickups include Desirae Morin in solid blue Colchester 9-2, and software engineer Jon Lynch in “split” Colchester 9-1 (Malletts Bay), where he wants to unseat one-term Democrat Sarita Austin. In Lamoille County, Shayne Spence wants the seat held by Democrat Matt Hill, who declined to run again. Both Shannara Johnson and Tyler Machia hope to return a Morristown seat to the GOP. Republicans hope to recover the House seat vacated by Dylan Giambatista when he ran unsuccessfully for the senate.

2 thoughts on “Can House GOP get its veto back? Watch these races”