Editor’s note: This commentary is by Keith Cappellini, a resident of Plymouth.

As Vermont continues to navigate the trials and travails of a Covid-19 world, I’m reminded of a quote from one of America’s great truth-tellers, Hunter S. Thompson, who would definitely have something to say about our current predicament were he still alive: “When the going gets weird, the weird turn pro.”

Indeed, Vermonters will need to don their mud boots early if the proverbial s— gets any deeper.

Just recently, Vermonters in my part of the state, most of whom shop across the river to save a few bucks, learned that they will now have to “quarantine” after visiting the stores in Lebanon, New Hampshire.

To add insult to injury, this flies in stark contrast to the scenes that have played out all summer and fall long in Vermont’s own stores, where flatlanders have descended unchecked like swarms of locusts, emptying shelves of commodities in short supply and desperately needed by Vermont families. 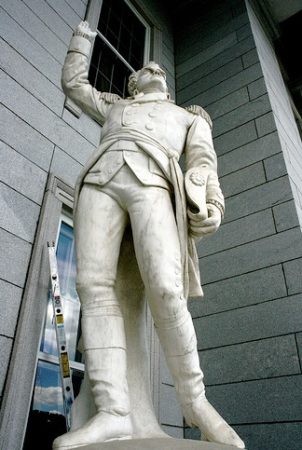 What would Ethan Allen do?

Locals all seem to share the same assessment: none have ever seen this many flatlanders around, not even in winter. Indeed, the ski town of Ludlow has been awash in a sea of Land Rovers, Porsche Canameras and Teslas, with Connecticut, Massachusetts, and New York license plates outnumbering Vermont plates 20 to 1.

In addition to driving up the price of real estate with all-cash offers and bidding wars like those experienced during the height of the housing boom in 2006, these plague-pioneers are also placing a strain on already strapped local utilities, with multiple phone and internet outages over the past several months, as a grid designed for a rural populace stretches to try and accommodate the online shopping and work-from-home-habits of thousands of new uninvited guests.

Things should get interesting this winter, as the CDC now postulates that the Covid-19 virus is actually more resilient and spreads easier in low-humidity environments. How does a wood-fired lodge full of flatlanders sound? Skiing, anyone?

Never mind the thought of just trying to staff these places. The radio these days squawks with ads run by Vermont’s hospitality industry, with places like the Woodstock Inn that can no longer hire Eastern Europeans on work visas due to travel restrictions now trying to seduce Vermonters to come change sheets and wait on flatlanders.

I don’t begrudge Vermont’s current governor for his handling of the state’s pandemic response. At the end of the day, Vermont is a tiny banana republic, in that it relies on tourist dollars to keep the economy humming. Still, New York just revamped their own quarantine polices, affecting visitors from more than two thirds of the country. Are Vermonters supposed to accept that day trippers from two of the most affected states, New York and Massachusetts, should able to cross Vermont’s borders unimpeded?

If Vermont is to remain a state where “real” people actually live, and not a “Disney World” for flatlanders, then someone will have to decide how to protect the lives and interests of those whose vision of Vermont does not dovetail nicely with that of the Democratic super-majority Legislature.

To be sure, the current line up of Democratic state representatives and senators vying for (re)election will not be living up to this task.

Esteemed Founding Father Benjamin Franklin once wrote in his “Farmer’s Almanac” that “an empty sack cannot stand up on it’s own.”

With a combined total of more than 60 years of incumbency among them, it’s a wonder they even bother to campaign at all, even during a pandemic. One ponders exactly what brings someone to festoon their lawn with the chloroplast of these politicians? Do folks actually understand and support what these elected representatives of the body politic are voting for and proposing up at the statehouse? A large part of me thinks not, as many townspeople in Reading angered by the pending closing of their beloved elementary school by Act 46 were shocked to learn that Ms. Clarkson — ever the effusive ham at the town’s Fourth of July parade — was a sponsor of the bill.

Such has been the case for most of the tenure of these three career politicians, whereby they pay lip service to the needs of actual Vermonters, then go off and fill their sacks full of vanity legislation that benefits anti-constitutional, progressive, Belt Way agendas and reinforces a type of groupthink alien to Vermont’s core values. In the case of Ms. Clarkson, this is the same person who turned the most scenic view in her district, the Quechee Gorge Bridge, into a caged New Jersey overpass.

Given the long odds of actually turning the tide within the Statehouse through the ballot box this go-around, it’s time for Vermonters to “turn pro” and take a page from the European play book, where working folks are still an organized force to be reckoned with.

For example, this past January, 40,000 German farmers brought 8,600 tractors to Berlin, Germany, whereby they formed a 10-kilometer-long blockade of the Capitol, in protest of stifling new environmental regulations.

So, here in Vermont, next time when you ask your elected representatives for lower taxes, and you get a regional climate tax and an asinine climate bill with its very own un-elected “Climate Council,” give them back this: leave the “dirty” diesel trucks parked in the door yard, and when those who know best call for a fill-up of “transitional” oil or propane to keep their homes from freezing this winter, tell them they’ll have to wait on the battery-powered fuel truck instead.