Burlington’s Joint Committee on Police Transformation and Mayor Miro Weinberger issued a joint statement Thursday indicating they may recommend higher staffing levels for the city’s currently depleted police department, but the targets remain short of what the police chief recommends.

“We note that the draft report’s recommendation for 76 to 83 ‘require(d)’ officers does not equate to an “authorized cap,” the statement reads.

Back in 2020, the Burlington City Council voted to reduce its force by 30 percent, resulting in a 74-officer cap. Due to officers’ other commitments and injuries, by early July the available force was just 67 officers, or about a third less than the 96 officers recommended by Chief of Police Jon Murad.

Murad suggested that the department is facing a real scenario where traditional “area officers” become unavailable. 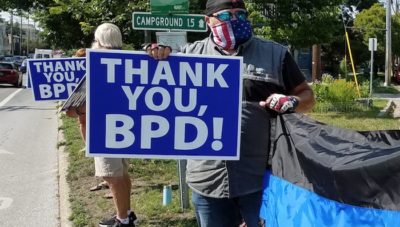 POLICE NEED HELP: At a pro-police rally in 2020, a few dozen Burlington residents came out to show their support of the Burlington Police Department.

The committee is led by Tyeastia Green, who also serves as Burlington’s director of racial equity, inclusion and belonging. In a video from December, Green interviewed students regarding race and social matters in which she makes several controversial statements about reparations and Martin Luther King, Jr., among other race-based topics.

The staffing estimates are based on a report by the consulting company CNA. The Virginia-based nonprofit has 150 total recommendations for Burlington’s police. However, the report is not yet available for public release.

The mayor’s office is having Green and CNA guide leaders on how many police officers to use.

“Under the leadership of Director Tyeastia Green, we reviewed the draft report over the last few days, and met yesterday with the CNA consultants to ask clarifying questions,” the joint release states.

As of late August, the city had already eclipsed its typical annual average of about two gun incidents per year — with 11 gun incidents. Latest reports from Burlington police include a third suspect who was identified regarding a shooting at Downtown Simon’s gas station on South Winooski Ave during the early hours of July 31.

According to the release, the suspect, Walter Hamiid Jones, 25, is known to police.

“Mr. Jones is a documented Bloods gang member out of Massachusetts,” the report states. It continues that Jones has 14 convictions including a home invasion, armed robberies, assaults with weapons, cocaine distribution, and more.

In addition, as reported by FOX Channel 8, at about 1:20 p.m. Thursday “police responded to a report of a person with a gunshot wound on the 100 block of Brooks Street. … At the scene, officers found 58-year-old Daniel Jones lying in the yard. Jones had suffered one gunshot wound to his left leg.”

It says that Jones was conscious and taken to a hospital.

The Burlington Police Department, on its Daily Incident Blotter, offers the public a way to track police activities on a day-to-day basis. The page includes a disclaimer that some victims “may have to wait” for an officer’s response.

“When neighbors call about safety, we will always answer, but other incidents may have to wait, depending on incident volume and officer availability,” it states.

According to the blotter on Wednesday, Burlington police responded to dozens of calls, including two retail thefts, four domestic disturbances, and three larceny calls.

While the department struggles to keep staffing up, Sgt. Brian DiFranco recently retired after two decades of service.

“Sergeant DiFranco became a staple at Burlington High School during his service as an SRO and formed lasting and meaningful relationships with students in our community,” a release states.