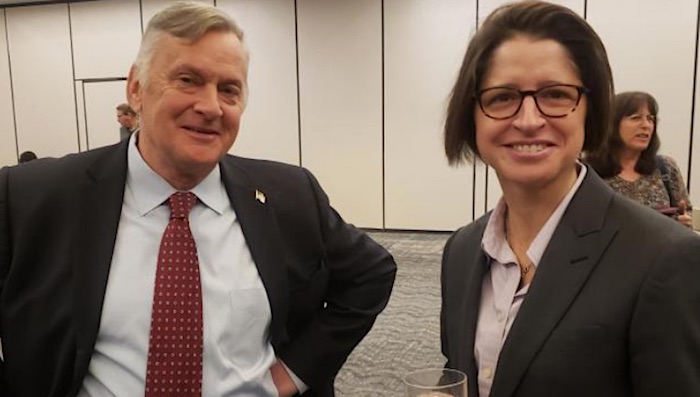 The vote was prompted by a proposed rule change by Jim Sexton of Essex Junction. Concerned that statewide candidates (including Gov. Phil Scott) have not always voted or implemented policies conforming to the party platform on free speech, gun rights, property rights and the sanctity of life, Sexton requested a rule change allowing discipline of candidates who veer from the platform.

Speaking to the crowd with about 20 supporters behind him, Sexton declared that “we’re not compromising anymore.” He’s heard from many Vermonters who say they can no longer support the party because of these defections from the party platform, he said. 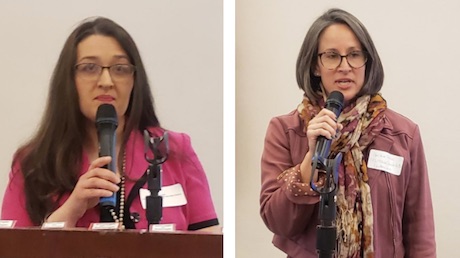 CANDIDATES FOR CONGRESS: Anya Tynio of Island Pond, left, and Ericka Redic of Burlington both told voters they are running for the Republican nomination for U.S. Congress.

Attendees also learned there will be a Republican primary for the U.S. Congress seat. Two-time candidate Anya Tynio of Island Pond announced she will seek election again, joining Ericka Redic as the two candidates (so far) to announce the intent to replace Rep. Peter Welch, who is running for the U.S. Senate.

Attendees also had the opportunity to meet Senate candidates Christina Nolan of Westford and Gerald Malloy of Perkinsville. Malloy is a retired U.S. Army officer and federal worker. Nolan is the former U.S. Attorney appointed by President Donald Trump. They also heard from independent Senate candidate Mark Coester, who is a member of the Westminster GOP committee.

“We need a party full of leaders who want to do the work,” Dame told the crowd of an estimated 100 people present at a Williston Road restaurant. “There is no cavalry coming. We are our own cavalry.” In agreement with his sentiment, town and county committees are busy recruiting candidates and updating phone and mailing lists. For example, the Washington County GOP will hold a work session Thursday, March 31 in Berlin from 6-8 pm.