The following is Sen. Patrick Leahy’s opening statement on the confirmation hearing of Judge Ketanji Brown Jackson to be an associate justice of The U.S. Supreme Court.

Welcome, Judge Jackson. Today and throughout this week, the Committee, and the country, will hear from Judge Ketanji Brown Jackson, who has been nominated to be the next Associate Justice of the United States Supreme Court. Any nomination to the Court is historic; there have been only 115 Justices in our Nation’s history. Judge Jackson’s nomination is historic in more ways than one. Her nomination, pending a confirmation by the Senate, will bring us one step closer to having a Supreme Court that is more reflective of the Nation. One where diversity of race, gender, background, education and experience allow all Americans to look to their Court and see in its Justices a reflection of the American people. 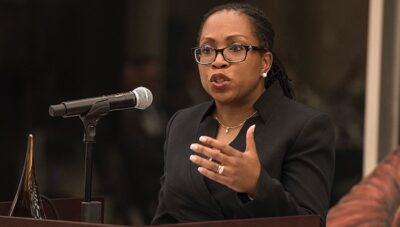 Judge Jackson, just with your presence here today, you are writing a new page in the history of America.

Who the President nominates, and the Senate decides to confirm, to our Federal judiciary, and especially our Nation’s highest Court, is critically important.  The American people—our constituents—and their faith in the courts is central to our democracy.  The decisions made in our courts, and ultimately at the Supreme Court, affect the daily lives of each one of us.  Fundamental questions about access to health care, the integrity of our elections, the fairness of our criminal justice system, the preservation of bedrock environmental laws, protections for workers—these issues, and many more, are routinely decided by the Court.  Every American must believe the courts are impartial and independent.  They must believe that our courts are not a mere political arm of the Executive or the Congress, but faithful only to the rule of law.  The stakes are simply too high.

Let’s make a few things clear. Judge Jackson is no judicial activist.  She is not a puppet of the so-called “radical left.” She has been praised by Republican-appointed judges for her jurisprudence.  Lawyers from the right and the left who have appeared before her in court have called her “judicious and even-handed.”

And no, Judge Jackson is not, quote, “soft on crime.” Her background as a Federal public defender would bring an informed perspective of the criminal justice system to the Supreme Court.  I am a former prosecutor.  Confidence in my prosecution of a case was strongest when I knew the defendant had the best representation.  When both sides and the presiding judge have a real grasp of our criminal justice system, that is when justice is most likely to be done. Judge Jackson’s background here is an asset to the Court, not a liability.

Since her nomination, and again here today, we have heard about the long, distinguished record of Judge Jackson. A graduate of Harvard and Harvard Law School. A judicial clerk at the district, circuit and Supreme Court levels.  A Federal appellate judge, a Federal district court judge, a member of the U.S. Sentencing Commission, an attorney in private practice, and a Federal public defender.  All these experiences and perspectives have provided her a mastery of our justice system, and in particular, the criminal justice system.  If confirmed, she would become the first ever Justice to have served as a Federal public defender, an important experience given how much the Court shapes our criminal justice system.

Perhaps most of all, it is Judge Jackson’s nearly 10 years as an appellate and trial judge that underscore the experience she would bring to the Supreme Court.  Confirmed unanimously by the Senate in 2013 to the D.C. District Court, she served with distinction for eight years, issuing more than 500 opinions and presiding over a dozen trials.  A bipartisan majority of the Senate confirmed her to the D.C. Circuit Court of Appeals last year.  She is a fair and impartial jurist, with a fidelity to the law above all else.  This is what Americans want to see in a Supreme Court Justice.

Years of so-called ‘judicial wars’ have left Americans feeling like our courts have become increasingly partisan.  The extreme interests of pressure groups on both sides of the political spectrum have left the American people wondering if they can get a fair shake in our courts.  And yet in this moment, we have before us a unique opportunity to change the narrative. I am under no illusion that we can mend this process overnight. But we have before us a nominee who has brought us together across party lines before. And one who perhaps can bring us together again. The Senate can change course and return to how we fairly and objectively evaluate nominees, with the highly qualified nominee we have in Judge Jackson.

I am the President Pro Tempore of the Senate.  A former Chairman of this Committee.  I have participated in 20 prior Supreme Court nomination processes, most leading to confirmation, and a small handful not.  I have supported nominees from both Democratic and Republican Presidents.  In Judge Jackson, I have found a distinguished nominee with an unassailable record that merits our respect, regardless of party.  I believe the American people will see in her what I have come to learn in my review of her career and life story.

Judge Jackson’s nomination is a reflection of the arc of our democracy—the arc that bends toward justice, as Dr. King once said.  Although in fits and starts, with every generation, we have sought to become more inclusive and more representative.  We have looked to citizens, civic leaders, elected representatives, and yes, to judges, to strengthen our democracy and to recognize that our strength comes from our diversity.  Judge Jackson’s story, and her nomination today, is part of the evolving story of America.

Judge Jackson, I want to congratulate you on this nomination.  Despite all the darkness in the world and the political brinksmanship that has unfortunately become a hallmark of Congress in recent years, your nomination fills me with hope—hope for the Court, hope for the rule of law, hope for the country.  One need look no further than the chaos, devastation and inhumanity halfway around the world in Ukraine to know how precious our democracy is.  And how precious a legacy we have in our independent Federal judiciary.  I need look no further than my own grandchildren to know how necessary our fight for freedom, fairness, and equality is.  The independence and impartiality of our courts, and of the Supreme Court, are a cornerstone of the great experiment that is the United States.  In you, the American people have a nominee in whom they can be proud.  We have before us an historic moment; I hope we can meet it.

I look forward to your testimony this week.