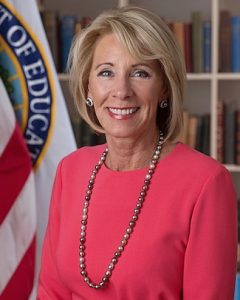 “The outcomes for students in D.C. have continued to improve, from the most underperforming district in the country to now one that is on a growth trajectory,” DeVos said Wednesday at The Heritage Foundation, during an event marking National School Choice Week.

The secretary, as an education activist, was instrumental in working with the D.C. city government and a bipartisan coalition in Congress to establish the Opportunity Scholarship Program, which began operating in 2004.

Public school students in the District of Columbia no longer are required to attend a public school in their neighborhood.

“Today over 50 percent of the kids in D.C. attend schools that they are not assigned to,” DeVos said, adding:

DeVos spoke at the event from a wheelchair as she recovers from injuries from a Dec. 30 road-biking accident that left her unable to put weight on her left leg for three months. (The program begins at the 20-minute mark in the video above.)

Heritage Foundation President Kay Coles James, interviewing DeVos during the event, said: “We all love you and wish you well, and I think it sends a positive message that you can’t keep a good woman down.”

In her introduction, James talked about the success of the D.C. Opportunity Scholarship Program, or OSP, and the growth of school choice nationally.

DeVos said Congress should strengthen the program. She said:

It is imperative that Congress not only reauthorize this program, but do so with predictability and stability. I would argue with an automatic growth piece put into it, so that more and more students can continue to take advantage of the choices that some have today. The demand continues to be unmet.

In my view, that’s the most important goal. Parents continue to want more choices. They are demanding more for their kids. And we need to, as a nation, embrace the notion that our future is reliant on what we do today.

Today, school choice programs in the states include education savings accounts, tax credits, and vouchers, and are accessed by about 482,000 students. That’s a more than twofold increase in participating students from 2011 — the year National School Choice Week was launched — when 31 school choice programs were accessible to about 212,000 students.

Vouchers work as a form of publicly funded scholarships, paying for K-12 students to attend private schools. Tax credits allow parents to write off the cost of private education in filing their state taxes.

The accounts allow parents to direct the funds that would have been spent by the state on their child in the public system. State funds for each pupil are deposited directly into a parent-controlled account.

Parents can use the money to pay for private school tuition, online learning, special education services and therapies, private tutoring, and a host of other education-related services, products, and providers.

DeVos referred to an American Federation for Children’s poll of 1,200 likely voters next year that found two-thirds support school choice.

“We know the most recent polling data has shown conclusively that people want to have choices for their kids—67 percent of the people in this country, two-thirds, support school choice,” DeVos said. “The only thing standing in the way is the teachers unions that have a personal financial vested interest.”

The National Education Association, the nation’s largest teachers union, states on its website:  “Private school vouchers—and similar schemes like tuition tax credits and education savings accounts—take scarce funding away from public schools and give it to private schools that are unaccountable to the public. We should focus on improving public schools, where 90 percent of children go, not on diverting money from them for the sake of the 10 percent who want to go to private schools.”

DeVos said both parties should be working together.

“Education should not be, is not really, a partisan issue. It really is reflective of the future of our country,” DeVos said. “If students today aren’t prepared for what comes next, we’re not going to be prepared as a nation to compete with the rest of the world.”

Images courtesy of SchoolChoiceWeek.com and U.S. Department of Education