“They are out of touch, they get way too much wrong, and they just don’t seem to care,” Fleischer said. ” … I’m talking about the mainstream media, a topic that is somewhat close to me as a result of being a White House press secretary.” 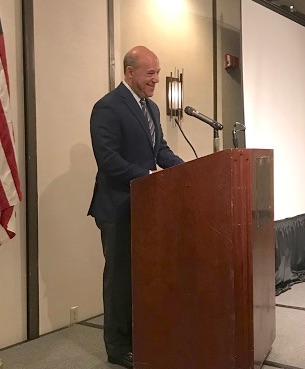 Fleischer said that polls show Republicans and Democrats alike are skeptical of reporting by mainstream media, and that only college-age Democrats are the exception. To explain why, he highlighted misleading stories and stories that required significant corrections.

As an example, he noted how major news outlets during the 2020 presidential election reported that church bells were ringing in London in celebration of President Joe Biden’s declared victory. Next day media had to issue corrections because the bells were part of a 500-year British tradition concerning a historical event.

Fleischer noted that after years of allegations of racism against conservatives, a handful of major media outlets chose not to not run a single story when Gary O’Connor, a now-disgraced Lamar County Democratic Party Chairman in Texas, called U.S. Sen. Tim Scott, R-S.C., who is an African American, an “oreo” back in May.

Fleischer said if a Republican made a similar racial slur at a Democrat, it would have been a viral story.

“It would be all over the news and [that person] would have to resign before the day was over,” he said.

And he took aim at some of the campaign promises that he doesn’t believe Biden kept.

Despite the current sinking poll numbers for the president, one audience member expressed doubt that Republicans can gain in elections against Democrats until election integrity is restored.

Fleischer responded by saying that while he doesn’t personally believe the 2020 presidential election was stolen from Trump, he noted that not all Republicans agree on this point, and he strongly advised that GOP leaders have sufficient lawyers ready to respond to any new cheating allegations. A new Rasmussen poll shows most Republicans, and nearly 1-in-3 Democrats, have doubts about the integrity of the 2020 election.

Fleischer is writing a book about his career experiences, which is due out next year. He also talked up Fox News, where he is currently a regular contributor.