RUTLAND — Members of the public as well as top voices in social justice matters met last Thursday evening to discuss where Vermont stands on social justice issues heading into the primary elections.

The NAACP for Vermont as well as the United States Attorney’s Office and the Vermont Attorney General’s Office helped organize the event, which took place in person and over the internet.

During the meeting, law enforcement experts shared how they deal with events that may have been motivated by hate. 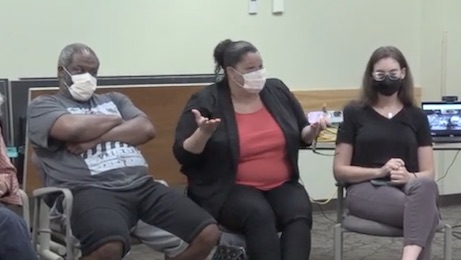 Attendees of the Hate-free Vermont Forum discuss issues of race and law enforcement.

“We have a criminal division that can prosecute hate crimes,” said Julio Thompson, assistant attorney general and director of the Attorney General’s Civil Rights Unit. “… We also have the ability to go to Civil Court even if there’s not an arrest to get a court order to keep the perpetrator away from the victims, and also assist the victims in receiving justice.”

Thompson said that based on public forums going back to 2019, more community involvement is needed.

“It was very clear to us in our office that when we interacted with people who needed help, we needed greater support and involvement with our victims’ advocate in our office who is trained to deal with victims,” Thompson said. “… Our investigators are essentially civil detectives.”

He explained how the Vermont Legislature has made it easier for hate crime charges to be included in incidents.

“In 2021 the legislature passed, and the governor signed, a change to the law that expressly recognized that a hate crime can happen if there is more than one reason for the conflict,” Thompson said. “You have motives that are mixed: someone’s race might not be the sole reason for an act of violence or even the predominant reason. The idea was to make it easier for our office and our county partners in the state’s attorneys offices to take cases and provide more justice.”

Xusana Davis, Vermont’s executive director of racial equity, answered questions about what state resources are available to deal with race-related matters from her office.

“A lot of it is that we have the tools that we need, and we just have to use it for aggressive good,” she said.

Davis added that an “equity curriculum” and workplace initiatives are among many ideas being looked into.

“The original equity task Force came up with 70 recommendations on three main topics: One is systems of support that exist for people of color in Vermont, two is hate crimes and prosecution, and three is getting more representation of people of color in state service,” she said.

Some ideas, such as extending the statute of limitations for reporting harassment, were proposed but never became law, Davis said.

“The struggle we have is we’re bound by the law and we have to investigate these incidents and match them up with what the law applies,” he said. “And when that happens between the FBI and the U.S. Attorney’s Office, they decide if it meets the criteria to be charged as a crime — that’s the hardest part.”

Jacob said that all crimes should be reported whether it’s believed that they can be solved or not.

“We can see patterns in crimes, we can start to focus on certain areas and look at those areas for people who are perpetrating those crimes,” he said. “It does help to report even if it goes unsolved.

Jacob also was asked what concerns from the public resonated with him the most.

“I think what we heard the most is that what these communities are going through, we as law enforcement and the FBI, we don’t see every day,” he said. “We don’t hear these stories every day, and we need to be attentive to that level of the community as well. And I often think we are disconnected from that level of the public.”