Even before COVID-19 cases spiked in the U.S., members of Congress were drafting legislation to punish China. Odds are the pandemic won’t be the great turning point in Sino-American relations that some anticipate.

But don’t expect Washington to ease the pressure on Beijing. That will continue so long as the regime persists in its destabilizing global activities and its relentless attempts to undermine American interests.

It’s no surprise that the plague out of Wuhan brought out the worst in America’s panda skeptics.

The Chinese Communist Party’s list of transgressions is long and shameful. But knowing they were dealing with one of the most infectious diseases in modern history and still allowing 7-9 million Chinese New Year celebrants to leave the country—that’s beyond the pale, even by Beijing standards. 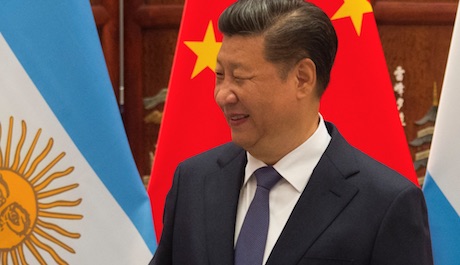 Once the coronavirus pandemic subsides, expect the U.S. to double down in four specific areas of competition. Pictured: Chinese President Xi Jinping

The regime exacerbated that wrong with its ham-handed abuse of the global public health community. That included marginalizing Taiwan, one of the world leaders in effectively recognizing and responding to the threat.

Then the regime launched an unprecedented propaganda war to shift the blame and promote the Chinese Communist Party as the world leader in the pandemic response (a line of lies sadly parroted by media and pundits in the U.S.). Then came hints that the regime might withhold lifesaving drug exports to the U.S.

Irresponsible behavior continues. There are still very real concerns that China is lying about its response, including the current numbers and source of infections. The world needs all the accurate data it can get to understand and combat this terrible scourge.

Washington’s expressions of anger against the communist regime have ranged from symbolic diplomatic finger-waving and name-calling to demands for reparations. Among the bills already introduced is one that would disconnect the U.S. pharmaceutical supply chain from Chinese sources.

What’s needed most, however, is a sober, thorough congressional assessment of how the U.S. can mitigate future risks of a global pandemic, based on what we have and will learn from this current, horrific experience.

Don’t expect those efforts to culminate anytime soon, however. Congress will likely be out for a while.

Lawmakers will have a very busy summer catching up on all the campaigning foregone during these stay-at-home days. And more legislation to spur an economic recovery will also be up for consideration. U.S. recovery. Spanking China will have to wait in line.

But when Congress is able to sit down and consider how best to limit our future vulnerabilities, it may figure out that, in the attempt to secure supply, it’s wise to make sure that the cure won’t be worse than the disease.

Any solution on pharmaceuticals, for example, has to protect U.S. patients and consumers. The answer might require more effort to open up markets, spur competition, and replenish the U.S. national medical stockpile—and not just blocking market access and slapping “buy America” provisions on federal agencies.

Further, we will have to see what kind of backing these efforts get from the White House.

On the one hand, economic security has become an even more powerful mantra for the administration—and no threat looms larger than China.

On the other hand, the president has spent a lot of attention and energy on re-balancing our economic relationship with China, purging its most aggressive predatory behavior. He’s preferred to manage that effort from the Oval Office rather than let Congress take the lead.

What we should not expect is a dramatic shift in U.S. strategy. Pushing back on China is baked into the administration’s national security agenda. It’s not likely to revisit its core assumptions because of COVID-19.

The administration believes this a competition the U.S. can manage. It doesn’t see China as an existential threat; it isn’t going to opt for drastic polices like “hard-core” decoupling from Beijing, which would split the world in American and Chinese camps.

The Trump administration is far more likely to continue to soldier on, pushing back wherever China impinges on U.S interests and responsibilities in the economic, political, military, and diplomatic spheres, until China stops and respects the equities of America and its allies.

But that doesn’t mean just business as usual. Expect the U.S. to double down in these four specific areas of competition.

China will try to exploit the COVID-19 chaos by splitting off countries and pulling them into its orbit.

One example is Italy. While the Italian people are (quite reasonably) upset with China, Beijing still enjoys a cozy relationship with the Five Star Movement, which might try to cut a deal with China before it is ousted from power.

In most places, however, Beijing is losing ground. The U.K. government is so angry with China, it may well pull completely out of its 5G deal with Huawei.

If ever there were a time for the U.S. to redouble efforts to strengthen its transatlantic relationships, that time is now. There is much that can be done.

Washington’s second priority must be to seal our key partnerships in the Indo-Pacific. The “Quad-plus” framework is the perfect vehicle to drive that cooperation to the next level.

The stability of the Greater Middle East and Europe, both key strategic areas for the U.S., rests in part on more stable, productive, and peaceful lands to their South. Battling China’s deeply disruptive influence in the region will be part of making that a reality.

Expect U.S. efforts to go up, not down. Expect more, not less, cooperation with our European allies and the EU.

The U.S. has caught onto Beijing’s ploy of flooding critical international organizations with its flunkeys, who then turn the institutions to China’s purposes. Don’t expect the U.S. to let that infiltration go unchallenged in the years to come.

Of course, there is the question of how the current trajectory of U.S. China policy might change if President Donald Trump is ousted in November. No one can know for sure. But I think many would be surprised to find more continuity than change in future Sino policy, regardless of who occupies the White House in 2021.

Originally published in The National Interest