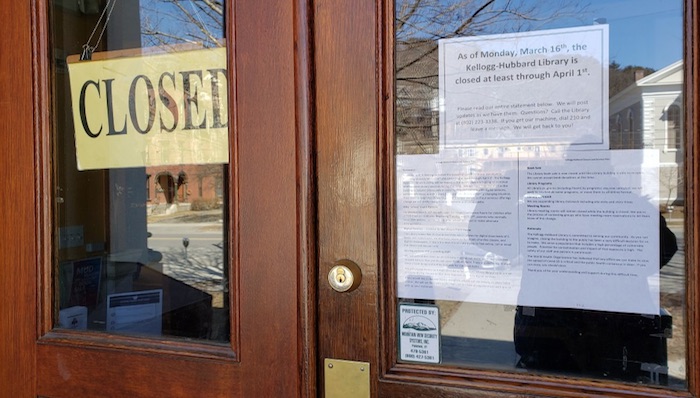 EXTENDED CLOSURES: Gov. Phil Scott has announced that business restrictions will continue until at least April 15, an extension from the previous April 6 deadline.

Gov. Phil Scott on Friday said he is extending business closures, which so far have caused more than 60,000 Vermonters to lose their jobs in a matter of weeks.

“This new order makes clear that any previous orders or directives that had an expiration date prior to April 15, are subject to the Stay Home, Stay Safe order, which means they must follow the in-person operation closure guidance until April 15,” the governor said in a statement.

The order applies to bars, restaurants and Department of Motor Vehicles in-person operation, which were set to expire April 6.

At his Monday press conference, Scott hinted that even more extensions lie ahead. For example, Vermonters can expect the governor to announce this week that the “stay home, stay safe” order will be extended beyond April 15.

“We’ll extend it for a period of time and then update as necessary based on the science and the data that we receive,” he said.

As of Monday, the state of Vermont is reporting 23 coronavirus deaths. Health Commissioner Mark Levine, speaking at a Monday press conference, said total Vermont deaths from the pandemic could reach as high as 100.

Meanwhile, approximately 60,000 Vermonters have lost their livelihoods over the past three weeks as a result of the Scott administration’s orders closing businesses and forcing Vermonters to stay home. The job losses are expected to climb if Scott keeps the state closed for months.

Responding to a reporter’s question Monday about whether social distancing measures could be ordered in the future if the virus reemerges, Scott said it depends on the situation.

“For us to say that once this wave is over that we’ll go back to normal would be disingenuous,” he said. “We’re going to have to be constantly monitoring and making sure that we make corrections as best as can based on the science and the information that we are receiving.”

President Donald Trump has said he hopes May 1 can be a target for Americans to get back to work. He is calling for a second Coronavirus Task Force to focus on getting the economy started again.

Medical experts are predicting the coronavirus pandemic to hit its peak in the United States within the next two weeks.

Coronavirus deaths in the U.S. reached 8,910 on Monday, according to the Centers for Disease Control and Prevention, with more than half of fatalities — 4,758 — occurring in New York.

A study by Breitbart News indicates that actual hospitalization rates from the coronavirus are well below the projections put out by the federal government.

“The results showed that the actual number of cumulative hospitalizations as a percentage of regular hospital beds needed projected by the IHME model ranged from nine percent in Tennessee to 47 percent in Florida,” the report states.

The relative quiet of most hospitals hasn’t gone unnoticed by the public. The #FilmYourHospital social media trend on Twitter continues to be a viral phenomenon, as citizens nationwide post personal videos of orderly hospitals experiencing manageable numbers of patients. The citizen posting counters reports by some media outlets that hospitals are facing severe overcrowding and long testing wait lines related to COVID-19 cases.

Increasingly, commentators are voicing concerns that the economic impacts of the shutdown could be worse than the virus.

“The scale of this [economic collapse] hasn’t quite registered yet — our leaders are still far more afraid of a virus that probably kills fewer than 1 percent of those infected, than the prospect of a third of all Americans losing their job,” Fox News host Tucker Carlson said this week.

“A year from now, what will seem scarier, the Chinese coronavirus or the economic devastation it brought? It’s worth thinking about that,” he said.