New York Gov. Andrew Cuomo speaks to reporters as he exits his daily news briefing on the coronavirus April 7, 2020, in Albany, New York.

New York Gov. Andrew Cuomo said Tuesday he has been in consultation with the governors of New Jersey and Connecticut about a regional approach to restarting the economy once the coronavirus crisis starts to ease up in the region.

Cuomo, speaking during his daily briefing on the virus pandemic, warned it was too early to discuss specific dates for things to begin getting back to normal. But he said the three states intend to work in concert to make sure the process goes as smoothly as possible.

“We coordinated the shutting down … because this really operates as a tri-state area,” he said. “We try to operate as the best we can as that regional collaboration. … We have to start planning restarting life. We’re not there yet, but this is not a light switch that we can just flick one day and everything goes back to normal.”

The number of new hospitalizations showed a slight uptick from the dramatically lower numbers reported Monday, but at 656 they still remained substantially lower than the 1,427 seen April 2. 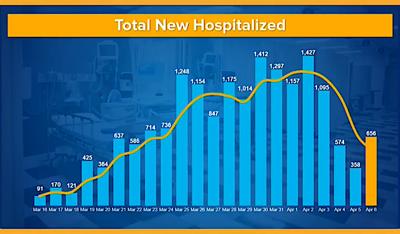 The number of deaths from COVID-19, however, jumped dramatically, with 731 marking a new high for a single-day death toll in New York. That brought the state’s total number of deaths over the course of the crisis to 5,489. The state has seen about 47 percent of all the deaths nationwide, which totaled 11,690 on Tuesday.

The governor explained that the number of new hospitalizations and deaths going in opposite directions was to be expected, since fatal outcomes can take days or even weeks to play out even if new cases are in decline.

“It’s something I struggle with every day,” Cuomo said. “You can’t save everyone. This virus is very good at what it does, and it kills vulnerable people. That’s what it does … you can’t stop that. The question is, are you saving everyone you can save? … The answer is yes, and I take some solace from that fact.”

He also revealed that the state was going to begin antibody tests, on a small scale, to identify individuals who have had the virus and recovered. He said widespread administration of such tests would be a key step in beginning to allow people to return to normal work and life patterns.

At the moment, Cuomo said, the state only has about 50,000 antibody tests available, far from the number that would be required to make an impact in a state with a population of about 19 million.

Another key element to getting things back to normal, the governor said, will be another piece of federal legislation that helps state and local governments cope with a collapse in tax revenue since the nation began shutting down the economy in mid-March.

“You have to help restart the local governments,” Cuomo said. “That is going to be a federal stimulus bill, there’s no other way to do this. … The [previously] passed legislation did good for the nation, I have no doubt it gave aid to a lot of places and people that needed it, but it was not fair to New York, and that has to be remedied in any legislation going forward.”

Despite the optimistic tone, Cuomo was also adamant that any short-term end to self-isolation and social distancing would be premature.

“If we don’t do what we are doing, that is a much different curve,” he said. “So social distancing is working … that’s why you see those numbers coming down. … So to the extent we see a flattening or a possible plateau, that’s because of what we’re doing, and we have to keep doing it.”