In Vermont’s largely Democratic-controlled Addison County, Republicans have had few successes since the early 2000s. But in the county’s rural areas, outside the liberal “yuppie” community of Middlebury, the GOP performed well enough to maintain a presence.

Rep. Harvey Smith, a moderate Republican farmer from New Haven, is well respected by local voters, while maverick Republican Fred Baser, of Bristol, angered local party voters with his support of recent gun control. Across the county, Rep. Warren Van Wyck, R-Ferrisburgh, who hadn’t planned to run again this year, found himself winning a write-in campaign when the GOP failed to field a candidate for the local primary race. 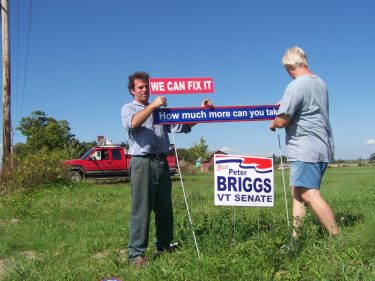 Back in time, former state Sen. Tom Bahre represented the Addison District for several terms during the 1990s and early 2000s. He battled for agricultural interests as well as gun rights; he took on state liberals to oppose expanding state regulations and property tax increases.

But Republicans haven’t had an elected state senator representing Addison County since 2002, when Bahre was defeated by liberal Democrat Sen. Claire Ayer with help from the Addison Independent, a local liberal newspaper.

But unlike past years, Addison County now has a crowded slate of state Senate candidates, although most are moderate-to-liberal Democrat and Independents — with one Republican.

Not only is this quartet vying among themselves for the hotly contested senate seat vacated by Ayer, who announced her retirement in May, but they are also facing off against Republican candidate Peter Briggs, a well-spoken, fiscally conservative Addison dairy farmer.

Briggs lost the 2014 race for the State House and the 2016 State Senate bid, but he thinks the county paradigm might be shifting.

Briggs was born in Addison County and raised on a dairy farm started by his great grandfather. He is especially proud of being the grandson of decorated World War II hero Henry Briggs, and he thinks about his grandfather’s legacy every day.

“I see it everywhere — people want to live in a more affordable Vermont,” Briggs told TNR. “That’s why we need to lower the tax burden and bring state spending within sensible lines.”

Briggs said that he is a pro-business candidate, as you’d expect from a Republican. And that’s why he wants to make Vermont a more business-friendly environment unlike most of the other candidates.

“We need reform. Taxes are simply unsustainable at this point,” Briggs said. “Despite the increase in revenues, members of the legislature still felt they had to raise taxes on those of us who work and produce.”

Briggs sees a need to reform the teachers’ pension system, too.

“Only by going to a 401K plan instead of a pension structure, and by reforming the education funding system which is a continuing problem, can we fix this,” he said.

Briggs also said that farmers are scapegoats for Montpelier when it comes to costly Lake Champlain pollution and immigration.

When it comes to the remaining weeks of the 2018 campaign, Briggs said that what he sees as its biggest downside is the lack of feeling like he’s part of team. That’s why he teamed up with Addison County assistant judge candidate Doug Tolles of New Haven. The pair are placing shared roadside campaign signs throughout the county. But it may also be a “sign” of Briggs’ belief in fiscal responsibility.

“For as much as people like to talk about running as a team in this party, they never seem to get around to it,” Briggs told TNR. “Early on, Doug and I decided to pool our resources since there aren’t many countywide candidates. … Whatever benefits one candidate benefits all the others in our party.” 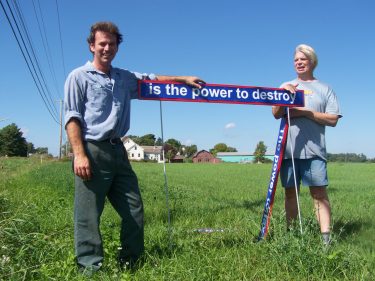 When it comes to the remaining weeks of the 2018 campaign, Peter Briggs (left) said that the biggest downside is the lack of feeling like he’s part of team. That’s why he teamed up with Addison County assistant judge candidate Doug Tolles (right).

Taking a cue from a successful Republican candidate in Windsor County two years ago, Briggs—along with Tolles—thought up a series of campaign signs, designed after the classic Burma-Shave ad slogan road signs of the 1930s and ’40s.

“We’re using a commercial sign maker in Vergennes,” said Tolles. “So we really ‘buy local’ when it comes to our campaigns.”

The Republicans’ Burma-Shave-style signs can be seen along Routes 7, 17, 22A, 116, and elsewhere. Addison County farming families with plenty of acreage, such as the Nops and Fosters, have given the OK for sign-slogan placements. Other property owners have enjoyed hosting the slogans as well.

“It is encouraging to see a young person like Peter so engaged in Vermont politics,” Melanie Carmichael, of Addison, told TNR. “Peter cares about Vermont and wants to help shape the course of the future of Vermont.  People driving down the road see road signs with names on them and don’t really know who these people are or what they believe in unless they are really engaged in politics. I feel these signs, that Peter has strategically placed around the county, will cause people to read and think about the issues. …  When November rolls around, and people step into the voting booth (and see Briggs’ name), they will say, ‘Oh yeah, he had the signs that said this or that, and I agree, and will vote for him.’”

The two candidates drive around the county once a week in Briggs’ aging Chevrolet Silverado pickup to change the “Burma Shave” slogans.

“We’ve come up with some pretty pithy slogans,” Briggs said. “They come from Ayn Rand to Eisenhower. And we change them out regularly.”

One of the recent slogans, which received thumbs up by passersby, was a quote from Republican President Dwight Eisenhower: “Farming looks easy … when your plow’s a pencil… and you’re 1,000 miles from the cornfield.” Both Briggs and Tolles like the 1950s-era Ike slogan.

Another slogan, which Briggs likes but Tolles thinks is too cerebral, is by the late libertarian author Ayn Rand: “We can ignore reality … but we cannot ignore… the consequences … of ignoring reality.”

Both Briggs and Tolles reported a lack of Phil Scott reelection campaign signs in many parts of Addison County. There might be a reason, Briggs said: “Scott is not a team player.”

“That’s what Republicans love about Don Turner running for lieutenant governor. He’s a team player whether it helps him or hurts him. Phil Scott has always been more of a Democrat, that’s why he’s teaming up with two independent Democrats, Audet and Ralston, October 2 in Middlebury. He hasn’t campaigned with his own party candidates here,” Briggs observed.

“I like Peter and he’s a good man,” Bahre said. “I also think he has better than an average chance of winning. However, even with that said, the problem is always getting a lot of people to know you during a campaign. You have to have the voters ask you questions they care about instead of just shaking hands. Of course all candidates have to deal with that fact.”