In 2005, the American Bar Association, in response to Republican congressmen criticizing judges for being “activist” and for imposing lenient sentences, asserted that judicial independence was threatened by such criticism. In an ABA commentary that year, the author suggested that two judicial murders may have been caused by the criticism. Calling out Republican congressmen by name, the ABA article quoted the judge whose family was murdered: “In this age of mass communication, harsh rhetoric is truly dangerous. It seems to me that even though we cannot prove a cause-and-effect relationship between rhetorical attacks on judges in general and violent acts of vengeance by a particular litigant, the fostering of disrespect for judges can only encourage those who are on the edge or on the fringe to exact revenge on a judge who displeases them.” 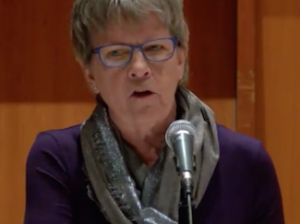 St. Johnsbury Attorney Deborah Bucknam: “The foundation of our democracy requires an independent judiciary. When lawyers only defend judges whose philosophy they agree with, independence is, like Judge Kavanaugh and his family, destroyed.”

ABA past President Robert Grey said at the time: “Let’s get one thing straight: the ABA will not compromise or negotiate the independence of America’s judiciary. We must address the current atmosphere in which our courts operate — whether state or federal — and what can only be called a decline in civility and respect toward our justice system. Our worsening atmosphere is as deadly a weapon against an independent judiciary as is any individual assailant.”

The ABA and state bar associations have continued to lament that criticism of judges endangers judicial independence. In January of this year, the ABA Standing Committee on the Judiciary instituted a series called “Defending Justice.” The purpose of the series, according to its chair, retired Judge Herbert B. Dixon, Jr., is to “initiate a collection of essays on the broad subject of ‘Judicial Independence.’” Since then, essays in the series have decried the politicization of the judiciary, echoing the 2005 themes. One “Defending Justice” essay published in May 2018 stated: “The politicization of the confirmation process further causes people to lose confidence in the independence of the judiciary and further erodes confidence in our most basic institutions of government.” Another “Defending Justice” essay published in June headlined: “Trump’s attacks on the courts undermine judicial independence.”

The American Bar Association, however, has remained silent in the face of the Democrat and media “search and destroy” mission against Judge Kavanaugh. The Kavanaugh confirmation hearings reached a new and disgusting low. Scores of people shouted insults from the gallery during the first phase of the hearings. Questioning by Democrat senators was brutal and nasty. Senate rules were ignored, with grandstanding by Spartacus Booker and other Democrat Senators. A “decline in civility and respect for our justice system” was evident to anyone who watched.

Then it got far worse. Judge Kavanaugh, a man of unblemished character, was ambushed
by an post hearing attack concerning an alleged activity that occurred while he was in high
school. High School! Kavanaugh was forced to respond to humiliating questions about juvenile slang concerning bodily functions, his teenage beer consumption, and to explain his everyday activities in the summer of his 17th year. Judge Kavanaugh told the Senate Judiciary Committee, “You have destroyed my family and my reputation.” None of that mattered to the mob. The accuser was believed before she even testified, and the hundreds of other women who have stood up publicly attesting to Judge Kavanaugh’s decency have been dismissed. Senators and the main stream media have called Judge Kavanaugh a sexual predator, an attempted rapist, and worse.

What was the ABA’s response to this unprecedented assault on a judge? It said nothing. Instead, the ABA president, seemingly doing the bidding of Democrat Senators, called for an FBI investigation, even though the ABA had given Judge Kavanaugh its highest rating after its own investigation.

The Vermont Bar Association was no better. At its annual meeting on Sept. 28, 2018, Chief Justice Reiber spoke to the association about the Kavanaugh confirmation hearing. He said nothing about the scurrilous attacks on Judge Kavanaugh, the death threats to his family, his heartbreaking testimony about his young daughter praying for the accuser. He only said that the accuser was courageous and credible, to enthusiastic and sustained applause by the lawyers present.

The lesson is clear: When Republicans attack judicial decisions, it is a threat to judicial independence. When Democrats launch vicious attacks on conservative judges, that is fair game. When a woman claims a conservative judge groped her 36 years ago, she is believed and celebrated. When hundreds of women publicly support that same judge, their words are given no credence.

It is true that the foundation of our democracy requires an independent judiciary. When lawyers only defend judges whose philosophy they agree with, independence is, like Judge Kavanaugh and his family, destroyed.