A $15 minimum wage could have a negative impact on retirees who live on a fixed income, yet the state’s advocates for seniors are refusing to get involved.

Few people think about retirees when they think of the minimum wage debate — but maybe they should. Economists have pointed out that retired seniors don’t receive wages and therefore can’t benefit from raising the wage. But they can get hurt — businesses forced to pay higher wages will pass that cost on to consumers in the form of higher prices for goods and services, and seniors will be the ones to suffer.

Yet Vermont’s advocates for seniors have remained strangely silent on the issue.

“We don’t have a position on the issue, nor is it one that we would be advocating for in the legislature, so we don’t have a comment to share,” Dave Reville, AARP associate communications director, told True North last week in an email. 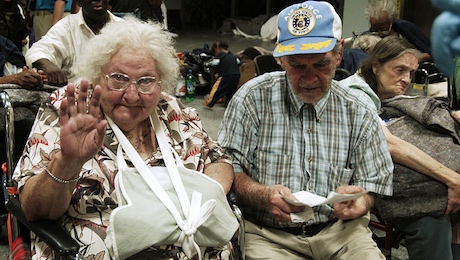 NO BENEFIT FOR SENIORS: A boost in minimum wage helps only those who earn it. For seniors in Vermont who no longer work, that means they won’t see any benefit but they will see higher costs for goods and services.

The group is not the only one sitting on the sidelines. Janet Hunt, executive director of the Vermont Association of Area Agencies on Aging, indicated that her group also is not taking a position on the minimum wage. She said she had been in contact with Vermont’s Council on Aging organizations, and they, too, had no comment on the policy.

For seniors who worry about paying higher prices for everything on a tight budget, that silence is deafening.

In a recent commentary about the impact of a $15 minimum wage on seniors, Rob Roper, president of the Ethan Allen Institute, a free-market think tank, warns that the Green Mountain State has reason for concern: “Vermont is the second oldest state in the union, which would mean implementing this experiment here would come with a disproportionately high level of pain.”

Roper cites UVM economist Art Woolf, who notes that most Vermonters living below the poverty line aren’t working. In fact, in a commentary on poverty written for the Burlington Free Press, Woolf estimates that many of the 31,000 non-working poor in Vermont are retirees.

State Rep. Brian Keefe, R-Manchester, told True North that he also worries about negative impacts for Vermont’s non-working poor. Keefe is a member of the House Committee on Human Services and was a member of the governor’s special committee to examine the impacts of a minimum wage increase.

In a candidate forum in Manchester last month, he spoke out for protecting vulnerable seniors.

“One of the problems with trying to solve poverty through minimum wage is that half the people that are living at or near poverty don’t earn a wage,” he said. “A lot of them are retirees living at lower income and they actually get hurt by a higher minimum wage because of the inflationary impacts of the minimum wage.”

He said retires “have nothing to gain by the minimum wage going up” and advocated finding other ways to benefit low-income Vermonters, such as focusing on money for home health service agencies and workers.

Not everyone thinks a raised minimum wage is going to have all negative impacts for seniors. Wayne Burton, writing for the Lancaster Online, suggested that increased earnings will increase funds flowing into Social Security.

“If we increase wages for millions of low-wage workers making less than $10 an hour, that will mean more revenue for the Social Security system, and likely a rosier financial picture for its future,” he wrote.

That assumes more money is being earned overall. Some analysts have reminded that work hours and positions will be cut in a transition to a $15 minimum wage.

Kathleen James, candidate for the House of Representatives from the Bennington-4 district, cautiously supports a raise of the minimum wage over six years to mitigate the negative impacts on Vermont’s many small businesses. She recently said in a debate forum that many minimum wage earners who are not retired, still fall into the upper-middle-aged category.

“[About] 45 percent of all minimum wage workers are over the age of 40,” she said. “These are not teenagers working part-time jobs after school. The average age is 38, and 58 percent of minimum wage earners are women, 22 percent have children, and 62 percent work full-time.”

4 thoughts on “AARP, other senior citizen groups silent on minimum wage despite impact on retirees”