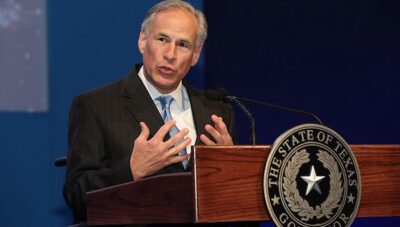 Abbott, who has been critical of President Joe Biden’s open border policies, sent a letter to Department of Public Safety Director Steve McCraw and Texas Military Department Adjutant General Thomas Suelzer in which he said, “Until Congress acts or the Biden Administration does its constitutionally required job, Texas Guardsmen and Troopers must bear the burden of securing the border.”

Thanking members of TMD and DPS for their “unprecedented work” through the state’s border security efforts, Abbott said, “You must continue to keep Texans and Americans safe and protect against an invasion of the southern border. I order you to use all resources and tools available to repel immigrants from attempting to cross illegally, arrest those who cross illegally and return them to the border, and arrest criminals who violate Texas law.”

In the letter, he directed both leaders “to defend Texas against what amounts to an invasion of America’s southern border.”

In a news release, the governor said OLS efforts “have repelled and turned back historic numbers of immigrants trying to cross the border illegally, arrested dangerous transnational criminals and criminal trespassers, and seized enough deadly fentanyl to kill every man, woman, and child in the nation.”

As of Nov. 11, the multi-agency effort has led to more than 323,000 apprehensions and more than 21,600 criminal arrests, with more than 19,200 felony charges reported, according to OLS data. They’ve also seized more than 350 million lethal doses of fentanyl, more than enough to kill every person in the United States.

However, Abbott’s understanding of “repelling an invasion,” county judges and others have argued, doesn’t include removing illegal foreign nationals from Texas soil. When Abbott refers to returning people to the border, he is referring to the standard operating procedure that’s still in place: returning them to ports of entry to Border Patrol agents – as directed in his July 7 executive order.

Any and all “turn back” and apprehension data reported by OLS is linked to Border Patrol data because they have to associate their numbers with an event that’s tracked in the Border Patrol system.

OLS data also doesn’t clarify how many people Texas law enforcement officers have “repelled” and to where, other than to ports of entry on Texas soil.

As groups of up to 700 people at a time and multiple caravans continue to enter Texas illegally, critics say that OLS efforts haven’t prevented illegal entry either before or after Abbott’s July 7 executive order.

Over the past 20 months, more people have entered Texas illegally than in U.S. and Texas history.

In the letter, Abbott said that, as commander-in-chief of Texas’ military forces, he’s “used constitutional authority, other authorization, and Executive Orders for historic actions such as building a border wall in multiple counties along the border, designating Mexican drug cartels as foreign terrorist organizations, and repelling immigrants seeking to enter illegally.”

Abbott argues his “aggressive action to aid border communities” includes busing thousands of people to Washington, D.C., New York City, Chicago and, most recently, Philadelphia. However, according to residents of border communities with whom The Center Square has spoken, they don’t want the foreign nationals who entered the country illegally transported into the U.S., they want them sent back to Mexico.

Image courtesy of Governor of Texas