In a request to the Joint Legislative Fiscal Committee, Gov. Chris Sununu is seeking authority to tap into $9.8 million to provide grants to 231 public schools and 18 private schools to pay for installing security designs, such as electronic door locks, panic buzzers, high-tech cameras and specialized glass meant to slow down an active shooter. 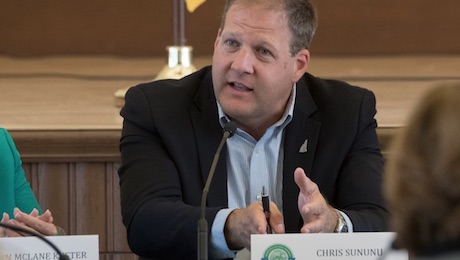 The grants, which will be taken up by the panel on Friday, were selected by the state Division of Homeland Security and Emergency Management, based on a ranking system that determined which schools were at higher risk.

The funding proposal is the latest from the state’s Security Action for Education program, which was launched earlier this year with federal pandemic relief aid.

Under the program, public and private schools could apply for up to $100,000 in funding for upgrades, including: access control, surveillance and emergency alert systems.

If the Fiscal Committee approves the grants, each school will receive nearly $40,000 for security upgrades, according to the Sununu administration.

Money for the upgrades comes from the state’s share of federal American Rescue Plan Act funds, surplus state revenue from excess tax collections, and other sources.

With a rash of recent high-profile shootings, schools across the country are once again wrestling with upgrades to security procedures, and systems to handle the threat of attacks on their buildings, teachers and students.

In New Hampshire, some districts are seeking to incorporate security designs into new buildings, such as panic buzzers, electronic door locks, high-tech cameras and specialized glass meant to slow down a shooter. Other schools want to create secure vestibules, where visitors are screened, at the main entrance.

Lawmakers in at least 26 states poured nearly $1 billion into school safety in 2018 in the wake of several deadly school shootings, according to the National Conference of State Legislatures. At least 200 legislative proposals addressing school safety were introduced in 39 different states, the group said.

Between 2018 and 2021, New Hampshire doled out more than $27 million in hundreds of grants to school districts to secure buildings, install cameras, bulletproof windows and improve communication systems.

More recently, the state doled out $3.8 million from its infrastructure fund to cover similar security upgrade projects at public schools.

Images courtesy of Public domain and U.S. Department of Agriculture