Let’s be honest and ask ourselves: Do we really look forward to going to meetings — be they meetings at companies, nonprofit organizations, or school and municipal settings? I found many meetings to be boring and not too productive. And in many cases I led the meeting. As I look back at a career that spanned five plus decades, I must have attended over 3,000 meetings.

We all can recall some of the negatives that continue to persist at meetings — they are too long, too many, agendas too structured, participants arriving late and unprepared, handouts arriving late, and so on. Also, there is too much material to digest in a short period of time, and not everyone at the table is at the same level of understanding of the topic. 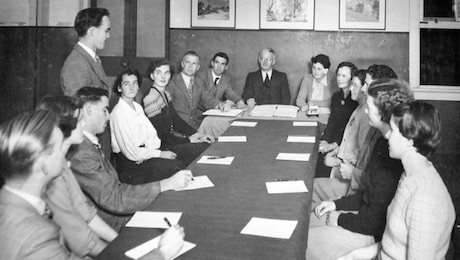 Meetings don’t have to be tedious, but often they are.

My time at meetings spanned the evolution of visual aids — from the chalkboard (ear-wrenching chalk squeaking) to the easel (with horrific handwriting) to the acetate slides (so often out of order or up in smoke if the lamp was left on too long), to the latest PowerPoint presentation, the standard at most meetings today.

Maybe I am too old fashioned and a quasi-Luddite, but PowerPoint does not do it for me. So many of the presentations have too many slides with an enormous amount of written and statistical data to read and comprehend — and then the next slide pops up. Also, it could very well be a factor of being old, but I do not have the skill to be able to listen to the PowerPoint presenter and at the same time be reading the laptop driven slide.

While I am no longer a practicing CPA, when I was in practice and attended three-day continuing education conferences in New York or in Washington, D.C., I was able to get the slides printed out — thousands of pages. So much so, there was a UPS station at the conference to ship the reports home. And yes, a lot of trees were harvested for this cause — but I liked things in print.

How meetings are conducted and what is to be presented can be improved. While I am not a fan of Amazon and Jeff Bezos (I don’t have a membership), I must give him credit for how his successful company runs its meetings.

Brad Porter wrote about how Amazon conducts its meetings in a piece in Company Culture. Amazon has only one set of material presented at meetings, a six page in-depth report on the subject that is to be discussed at the meeting. Before the discussion begins, each participant has about 30 minutes to read the handout — now everyone is at the same level of preparation, ready to discuss the subject. How often have we attended meetings where dozens of pages of financial statements or reports were handed out and comments were then asked for?

Of course, keeping handouts to a minimum and delivered on a timely basis are not the panacea for a successful meeting. One shortcoming I had often observed, especially at nonprofit board meetings, was how uncomfortable new board members were. They just did not have the background on an issue to make any meaningful contribution. My suggestion: assign a new board member with a board mentor for six months. The mentor, prior to a board meeting, would coach the new member on the subject, its relevance and history. No board member should ever feel uncomfortable at a meeting.

And to board chairs, a few tips — you are in charge, so take charge. If there are any board members who consistently fail to attend meetings, suggest to them that they step down from the board. Also, and most important, your fellow board members are giving up their time to attend the meeting, so respect them for it. Marathons are for running events, not meetings.

One thought on “Keelan: A case for improved meetings”