By James Phillips | The Daily Signal

President Donald Trump on Wednesday kept his campaign promise to recognize Jerusalem as Israel’s capital and ordered the State Department to make plans to eventually move the U.S. embassy there from Tel Aviv.

The long-delayed, symbolic move addressed a historic injustice: Israel is the only country in the world not allowed to choose its own capital. Trump also exercised America’s sovereign right to recognize the capital of a close ally and choose the location of its own embassy. 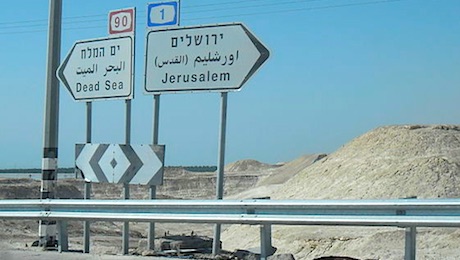 President Donald Trump has recognized a reality that Jerusalem is Israel’s capital without taking a position on the city’s final status that would be incompatible with a negotiated settlement.

In recent years, the refusal of many nations to acknowledge Jerusalem as Israel’s capital has become an integral part of the international campaign to de-legitimize Israel.

By recognizing Israeli sovereignty and historic ties to its capital city, the president not only struck a dramatic blow against this campaign, but reaffirmed the importance of close Israeli-American ties.

The president’s announcement also corrects a longtime historic anomaly: that the U.S. has a consulate general in Jerusalem to conduct diplomatic relations with the Palestinians, but no embassy in Jerusalem for engaging Israelis.

The commitment to move the embassy was already a longstanding U.S. policy. Congress voted by a bipartisan majority to pass the Jerusalem Embassy Act of 1995, which called for moving the U.S. embassy from Tel Aviv to Jerusalem by 1999, but allowed presidents to waive the move on national security grounds.

Every president since then has signed the waiver due to fear of provoking a backlash that would threaten U.S. interests and reduce the prospects for a final settlement of the Israeli-Palestinian conflict.

But the Oslo peace process stalled anyway, primarily due to continued Palestinian terrorism which undermined Israeli willingness to make increasingly risky concessions in exchange for Palestinian promises that often were not kept.

No good deed goes unpunished in the Middle East

The president is making a calculated gamble that Palestinian and other Arab leaders are more interested in negotiating a peace agreement, restraining extremism, and cooperating to contain Iran, than in escalating a confrontation with Israel and the United States.

U.S. officials have clearly stated that the president’s Jerusalem statement does not foreclose on peace negotiations, negate Palestinian claims to East Jerusalem, or rule out the creation of a Palestinian state.

Moreover, they have stressed that the Jerusalem statement does not alter U.S. policy toward the Muslim religious sites in Jerusalem, which will remain under Jordanian administrative control. This is important because control of the sites has been a highly emotional issue that anti-Israeli extremists have exploited to incite violence against Israel.

But Iran, Hamas, Hezbollah, al-Qaeda, ISIS, and other Islamist extremist movements are likely to seize on the Jerusalem issue to whip up opposition to the United States and Israel. There is a risk that this could distract Washington’s Arab allies and reduce their willingness to publicly cooperate with the United States to combat these forces.

There is also a risk that the Jerusalem statement could enable troublemakers to mobilize anti-American demonstrations and possibly riots. Terrorists also might use it as a pretext for attacks on the U.S. or Israel that they were already inclined to launch in any case.

The president has recognized a reality—that Jerusalem is Israel’s capital—without taking a position on the city’s final status that would be incompatible with a negotiated settlement.

Nevertheless, the president’s statement could disrupt Israeli-Palestinian peace negotiations in the short run. But those negotiations have been moribund for years.

Anti-Israeli and anti-Western Muslim states and movements opposed to any peace with Israel will willfully distort the implications of the move and exploit it for propaganda purposes.

If the Palestinian Authority chooses to intentionally misinterpret the implications of the president’s Jerusalem statement, then it is an indication that it is more concerned with denying Israel’s rights and sovereignty than with reaching a peace agreement that could affirm its own rights and sovereignty.

This would mean that it is not a genuine partner for peace, but remains locked into the old zero-sum thinking that has perpetuated the conflict at great cost to the Palestinian and Israeli people.

Trump’s statement could have a positive impact in the long run if it shocks Palestinian and other Arab leaders into recognizing that the longer they wait to genuinely accept Israel’s existence and sign a peace treaty, the less they can expect to gain from such a treaty.

The bottom line is that Trump has acted to implement a policy long mandated by law and supported by a bipartisan majority in Congress.

While his Jerusalem statement may complicate peace negotiations and undermine cooperation with Arab allies in the short run, it reflects a realism that could benefit U.S. policy and Arab thinking in the long run.