University of Vermont professor Aaron Kindsvatter has joined the ranks of those speaking out against critical race theory, and four months after an initial posting on YouTube, his clip continues to draw praise from Americans across the country. 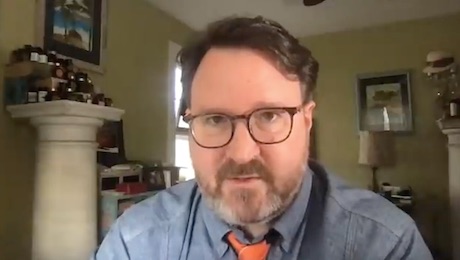 SUPPORTED NATIONALLY, IF NOT LOCALLY: UVM Professor Aaron Kindsvatter has weighed into hot-button race issues such as Critical Race Theory and anti-white rhetoric on college campuses.

In the original 9-minute March clip, Kindsvatter blows the whistle on an uncomfortable social environment at UVM where at least one staff member considered it acceptable to confront the professor regarding his skin color.

Kindsvatter shares that a university colleague approached him to offer to help in dealing with his “whiteness.”

Below the clip are 1,240 comments that are seemingly supportive of the professor.

“When people use ‘whiteness’, we should explain that this is an ‘anti-white’ slur. Can you imagine anyone complaining about ‘blackness’ or ‘Jewishness’?” wrote on commenter wrote last week.

Another commenter wrote: “Proud UVM dropout. The school is in steep decline and has been for years. I suppose the icing on the cake is their reduction of civics and history courses.”

In an email interview with True North, Kindsvatter commented on the phenomenon that he has garnered much support nationally.

“Those in a fundamentalist system have no opportunity to see the flaws in their thinking because they are rarely exposed to criticisms of it, and learn to dismiss criticisms that their favored ideas are exposed to, often with the aid of fallacious reasoning,” he said. “Under such a system, acceptable thoughts are continually reinforced, and it never occurs to many participants in a fundamentalist system to question the veracity or limitations of their beliefs.”

He added that, “They learn to utilize a kind of logical origami, so that all of the information to which they are exposed somehow proves that their suppositions are accurate. In such a system even a lack of evidence for acceptable suppositions can be taken as evidence that favored suppositions are, in fact, true.”

Asked what advice he might give to others who are experiencing overt racism against whites in the workplace, he said, “Make sure you find a community. People who speak out on these issues are subjected to vicious accusations and publicly shamed. It takes a very thick skin to withstand that and it takes a community of support to keep ones moral up. Folks can find such a community at Counterweight, an organization designed to provide help to people who have run afoul of wokeism.”