The State Board of Education got to hear from its two student members regarding their perspectives on the largely divisive masking policies at its recent regular meeting, and the theme of their comments showed the current policies seem to be working without a mandate.

The young women appeared to encourage masking, an issue that has the country divided mostly along political party lines.

Gabrielle Lucci, a junior at Rutland High School and a member of the board, told her colleagues outdoor mask breaks are often needed so children can catch their breath.

“Kids are usually very good about wearing them but occasionally we will have the issue of sometimes students in class lowering it below their nose, or somewhere in another area of the school. That can happen where kids will not want to keep their masks on for while,” she said. “But if that happens what we usually do, if it’s not in a classroom, we usually just tell them that they can step outside and have a mask break.” 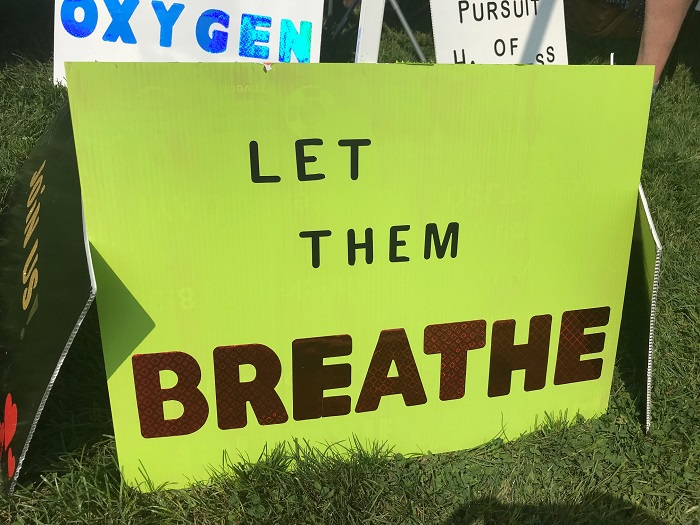 ‘LET THEM BREATHE’: A sign from a pro-constitution, anti-lockdown rally in Montpelier earlier this summer.

Angelita Peña, a student of Mount Abraham Union High School and a board member, said fellow students are mostly complying without a mandate.

“We haven’t had any mask problems, which has been absolutely amazing,” she said. “I will say we had a case that did expose a lot of kids, but thankfully a majority of our school is vaccinated and our school handled it very well.”

For parents, the issue of masking in schools has become one of the most divisive topics for the new school year. A recent Monmouth University poll shows a near-even split of Americans regarding the policy, and further breakdown indicates the split is mostly along party lines.

“The partisan split on this question is huge — 85% of Democrats support bringing back guidelines while 73% of Republicans oppose it,” the report states. “Independents are divided with 42% in support and 55% opposed.”

Earlier this month, Vermont State Epidemiologist Patsy Kelso said in an interview with WCAX that “the conditions just don’t warrant a statewide mandate for something like masks.”

In an email sent to True North Reports last week, Kelso added that COVID is likely here to stay, and that the state’s current approach to vaccination is a successful strategy.

“Unfortunately, it is not realistic to think we can 100% eliminate COVID-19,” she wrote. “However, Vermont is a highly vaccinated state, in fact, the most or one of the most vaccinated populations in the country.

“So, while we are seeing an increase in cases during this surge, including among people who are fully vaccinated, the vaccines continue to do their job – reducing cases, hospitalizations and the severity of illnesses, and, importantly, reducing the number of deaths.”

Statistics from the Centers for Disease Control and Prevention show that the vast majority of COVID-19 deaths in the U.S. have been of adults, and minors are far less likely to spread the virus.

Nevertheless, Kelso said masks should be used as a tool for preventing the spread of viruses in school settings.

“As you know, nearly all children under the age of 12 are not yet eligible to be vaccinated, so it makes good public health sense to do all we can to help limit the spread of the virus.”

Other serious viruses in the United States — including influenza, which has claimed more than 80,000 lives in a single year — have not been treated the same way as the coronavirus, especially with regard to mandatory masking and vaccination.

Asked how state and federal health department officials can justify the radically different approach taken for similarly deadly viruses, Kelso replied, “Covid-19 is not the same virus as influenza.”

The Biden administration is now opening an investigation into the Texas Education Agency in an attempt to block the mask ban.