BURLINGTON — Aside from Ethan Sonneborn, a 13-year-old Bristol student running for governor, Alex Farrell is Vermont’s youngest political candidate to announce a bid for elected office. The 25-year-old Burlington resident is running for state Senate as a Republican in deeply Democratic Chittenden County.

With discontent and division at high levels in Vermont politics, 2018 may be a good year for fresh young candidates to give voters a fresh new start. 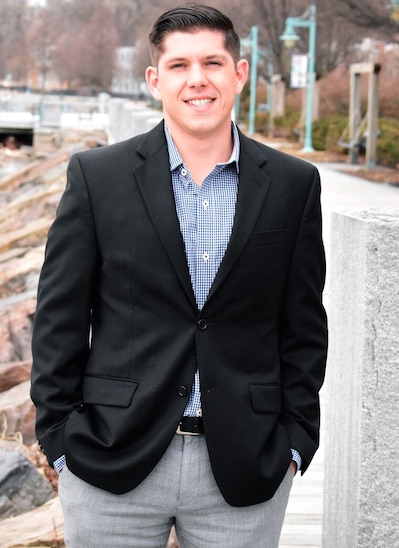 Burlington resident and financial analyst Alex Farrell is the youngest candidate to seek a seat in the Vermont Senate in 2018.

A senior business intelligence analyst for Montpelier-based Union Mutual Insurance of Vermont, Farrell grew up in Shelburne. He attended Champlain Valley Union High School in Hinesburg and graduated from the University of Vermont, where he studied business finance and political science.

Farrell serves on Burlington’s Board for Registration of Voters and is a member of the city steering committee for the Neighborhood Planning Assemblies in Wards 4 and 7. He is also a dedicated supporter of the Vermont Special Olympics, having donated many volunteer hours along with fundraising activities.

“There wasn’t one particular precipitating issue or event that made me want to run for the Vermont Senate,” Farrell said in an interview with True North Reports. “It kind of grew slowly on me — from, at first, local Burlington politics, to much larger statewide issues of concern.

“Chittenden County is near and dear to my heart. Primarily, I see anti-growth and anti-development people making it much harder for folks of all backgrounds to live in Vermont today. I want to make it easier for people of all stripes to live here. So, following Town Meeting Day last month … I decided to jump in on a state level.”

Farrell’s family has lived in Vermont for many generations. He says family and friends have noticed steady changes over the years affecting the state’s business and social landscape.

“As a young person making a decision to live right here in Vermont, I get sticker shock,” Farrell said. “I see friends leaving for jobs in Boston and New York City, where there are more opportunities. Then I read a commentary by economist Dr. Art Woolf of UVM, [who] reported about the state’s population stagnation. Most counties have shrunk a bit, and I want to be a part of reversing that trend.”

Farrell said Vermont has many hurdles yet to be addressed in Montpelier, but that change can’t happen if the same people remain in office.

“I suppose I am part of a rare breed of Vermont Republican candidates,” he said.

While Farrell doesn’t go into detail on state policy issues just yet, he paints an overall portrait of how he will approach legislating if elected. However, he seems to embrace Gov. Phil Scott’s vision of limited spending increases and no new tax hikes.

“Gov. Scott has made it pretty clear about there being no new taxes or fees in any legislation introduced, [and] I think that’s a very good thing,” he said. “Any legislators who oppose that idea would need to reevaluate their approach with the shifting needs of Vermonters.”

He supports other Scott agenda items, including the “cradle-to-career” education approach, statewide economic growth, expansion of pre-kindergarten education and a streamlining of the Act 250 process.

“In my job, I have to look at budgets and ROI projects, and the hardest thing to budget for is unpredictability. The Act 250 process is (unpredictable) for many developers,” he said.

To handle the more challenging matters of campaigning and policy, Farrell has surrounded himself with seasoned Vermont Republicans.

“Kurt and I are close. He’s guiding me and putting through the ‘Kurt Wright School of Legislation,'” Farrell said.

Maulucci has known Farrell for three years. He told True North that electing a young professional to the Vermont Senate would be a big plus for both the party and the state.

“We have difficult demographics here. We need to figure out how to recruit more young professionals and I think he’ll bring more perspective,” Maulucci said.

UVM business educator Thomas Chittenden, a descendant of Vermont’s first governor — Gov. Thomas Chittenden, who served from 1778 to 1789, when the state was an independent republic, and again during statehood, from 1790 to 1797 — knows Farrell from his days as a business student. He said Farrell was an excellent student, and that he’s pleased to see him run for elected office.

“Alex will offer a fresh perspective in Montpelier,” Chittenden told True North. “I am really glad to see Vermont youth get involved in the political arena. I can’t escape my own Vermont [and] Chittenden roots, so I think Alex will be a very good candidate and a good senator.”

Wright confirmed that he’s Farrell’s political mentor during the 2018 campaign.

“This is a big race and I am really excited for Alex,” Wright told TNR. “He is bright, a young professional, and will add some balance to the Chittenden County delegation which is always welcome.

“I think it’s great that a young man is willing to take on such a daunting task and challenge as running for a state Senate seat. I think Alex knows it’s a long shot, but sometimes long shots come in.”