Nicholas Languerand, 26, formerly of Wolcott, is the first person known to have Vermont connections to be sentenced for taking part in the Jan. 6 breach of the U.S. Capitol.

Languerand received a three year, eight-month sentence to federal prison for assaulting law enforcement during the Jan. 6 breach of the U.S. Capitol, according to a statement issued Wednesday, Jan. 26 by the U.S. Attorney in South Carolina. He will get credit for several months’ time served. 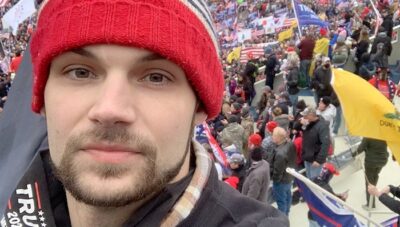 U.S. Department of Justice used selfies such as this one taken by Nicholas Languerand as partial evidence of his activities in the Jan. 6, 2021 riot at the U.S. Capitol.

According to a WBTW review of court documents, Languerand was present, took photos, and posted a (literally) blow by blow account of the interaction between protesters and Capitol police.

Wolcott is a rural, poverty-stricken Lamoille County town, at least compared to its neighbors Morristown and Hyde Park. According to a CBS account, family members testified Languerand overcame serious childhood challenges to acquire his high school diploma, and served in the military.

He assaulted law enforcement with a dangerous weapon “during the breach of the U.S. Capitol on Jan. 6, 2021, which disrupted a joint session of the U.S. Congress that was in the process of ascertaining and counting the electoral votes related to the presidential election,” the statement said.

According to court documents, Languerand, 26, most recently of Little River, South Carolina, was among rioters standing near the archway leading from the Lower West Terrace to the interior of the Capitol. Between 4:50 and 5 p.m., he threw various objects at officers with the U.S. Capitol Police and Metropolitan Police Department, including an orange traffic barrier and two stick-like objects. The officers were protecting the Lower West Terrace entrance. Based on the size and weight of the objects, as well as the speed and force with which Languerand threw them, the items were capable of inflicting serious bodily injury. Additionally, at about 5 p.m., Languerand took possession of a police riot shield, struck it against the ground, and then held it in front of him as he confronted police.

At the time of the Capitol breach, Languerand was residing in Wolcott, Vermont. He later moved to South Carolina, where he was arrested on April 15. He pleaded guilty on Nov. 3, in the District of Columbia, to assaulting, resisting, or impeding officers with a dangerous weapon. In addition to the prison term, Judge John D. Bates ordered Languerand to pay $2,000 in restitution. He also must serve a period of two years of supervised release following completion of his prison term. He additionally was ordered to perform 60 hours of community service.

In the one year since Jan. 6, more than 725 individuals have been arrested in nearly all 50 states for crimes related to the breach of the U.S. Capitol, including over 225 individuals charged with assaulting or impeding law enforcement. The investigation remains ongoing.

Anyone with tips can call 1-800-CALL-FBI (800-225-5324) or visit tips.fbi.gov. Most information above came from a US Attorney’s Office, District of South Carolina Press Release.