George Washington University’s Tau Kappa Epsilon fraternity was vandalized, including the desecration of a Torah scroll, on Halloween weekend.

While there was outrage and condemnation, the presence of antisemitism at my school has become all-too-routine for that to be a sufficient response. The desecration of a Torah scroll needs to be a wake-up call for all of us to recognize the unsettling hatred that Jewish college students face.

Just over two years ago, I stepped foot onto the George Washington University campus as an eager and naïve freshman. Little did I know, my freshman year would be riddled with anti-Israel hate and blatant antisemitism. The contemporary Jewish-American college student experiences this kind of hatred. 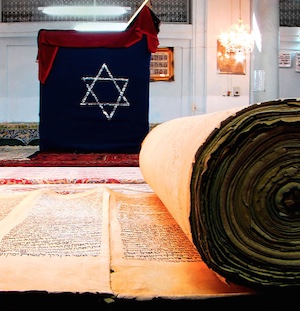 American society rarely stands idly by when an ethnic minority is subjugated in such a way. We have never seen the far left hesitate to claim a people is facing discrimination, yet here it is fomenting that very discrimination itself. Why are Jewish students the exception?

Coming off a gap year volunteering with the Israeli national ambulance service, I had extensive forewarning of inhospitable campus climates for conservatives. I eagerly anticipated getting involved in advocacy, quickly joining the school’s pro-Israel group and College Republican chapter.

Weeks after arriving, a student erupted with rage in my dorm hallway, wishing to “f—ing bomb Israel,” and warning Jewish students like me to get the “f— outta here, Jewish pieces of s—.” The initial chorus of condemnation soon splintered into disagreements as to why her outburst was antisemitic.

Anti-Israel groups and students took no issue with her support for the bombing of innocent civilians in the sliver of land that remains the only Jewish state in this world.

As antisemitism has unrelentingly plagued college campuses, the group George Washington University for Israel encouraged the Student Association to adopt the International Holocaust Remembrance Alliance’s definition of antisemitism—the same one officially adopted by 33 different countries, including the United States.

Ultimately, the George Washington University Student Association ignored our pleas and instead passed a definition devoid of any reference to Israel. It gave moral cover to those engaged in today’s popular displays of Jew-hatred. Factions of self-righteous politician-wannabe students determined that they were more qualified to define antisemitism than the International Holocaust Remembrance Alliance.

They set the precedent that antisemitism would go unchecked, that no repercussions would be felt. I hadn’t realized that liberal tolerance meant tolerating antisemitism.

Thus, a Jewish and outspokenly pro-Israel student finding a swastika vandalized on his dorm door just a couple months later came as little surprise to us. The Student Association released its generic platitude-filled statement of condemnation but lacked any substantive follow-up to address the root cause of the issue.

The following month, George Washington University publicly announced via a campus-wide email that attendees of a recent pro-Israel conference in Washington, D.C., would be forced to quarantine. An outpouring of online activity ensued, tapping into the centuries-old trope of Jews spreading diseases. While students who had been at other conferences had to simultaneously quarantine, the school sent no such email announcing that fact.

That year was culminated with the appointment of an interim dean for George Washington University’s International Affairs School whose career work focuses on delegitimizing the state of Israel. As a school that values academic freedom, we viewed the appointment of a person who propagates an academic boycott of the one Jewish state in this world to be antithetical to such a tenet.

We heavily protested this appointment, launching a petition to display the gravity this issue necessitated.

This is simply a sampling of incidents that occurred at just one American college campus over the course of a singular school year. This is to speak nothing of the near daily harassment Jewish and pro-Israel students face under the guise of anti-Zionism.

Detractors often purport that we label their actions as antisemitic to avoid facing the substance of Israel criticism. That is patently false. The majority of American Jews have criticisms of the Israeli government and its policies. Yet 95% of American Jews—including those who may maintain those reservations—identify as Zionist.

Dissent is healthy for any democracy and not in the least bit antisemitic. Denying the Jewish people the right to self-determination while according it to any other ethnic group, however, is antisemitic. When woke students attack an entire people’s inherent right, that is not legitimate criticism of a specific and nuanced modern-day state.

Universities don’t just house the next generation of Americans and American leaders; they can act as a microcosm for the entire country. While only 2% of our population is Jewish, Jews are the victims of nearly 63% of FBI-designated religious-based hate crimes.

Anyone claiming a lack of correlation between the rise in vehement anti-Israel rhetoric and this alarming rate of anti-Jewish hate crimes either has an agenda or is ignorant to the reality on the ground for Jewish students.

This is not an indictment of all liberals. Fortunately, support for Israel remains strongly bipartisan in Congress. This is also not to say that antisemitism comes only from the far left. It persists in all who foster hate and bigotry.

My peers and I don’t face routine antisemitism from Klansmen, though. If we did, it would receive universal and categorical condemnation. The routine antisemitism we face is from the far left. A new culture of wokeism has attempted to redefine Jew hatred, reprieving perpetrators of any accountability.

We must act upon this reality. This self-created haven for antisemites needs to be called out. It begins with defining acts of antisemitism as such. College students cannot be left to fight this battle alone.

American society rarely stands idly by when an ethnic minority is subjugated in such a way. We have never seen the far left hesitate to claim a people is facing discrimination, yet here it is fomenting that very discrimination itself. Why are Jewish students the exception?