All Earth Renewables CEO David Blittersdorf has been the biggest name in industrial wind in Vermont for decades, but changes in the state’s regulatory and political environment have led the green-energy mogul to look for greener pastures elsewhere.

“It’s been a confluence of factors. Certainly, some of the neighboring states seem more open to making wind part of their energy portfolios,” All Earth Renewables communications manager Nick Charyk told True North on Wednesday.

As reported Monday by WCAX, Blittersdorf said developers are “being slowed down due to the rules and the present administration that wants to see that some things don’t happen.” He also said new sound rules were having a “chilling effect” and that Vermont’s wind energy policy is “going backward really, really fast right now.” 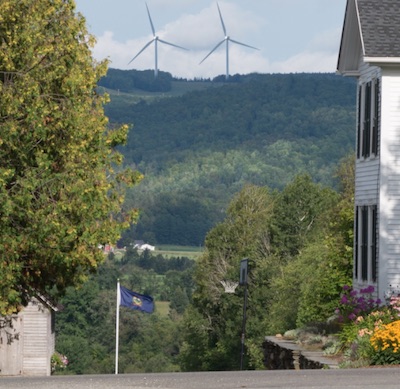 One of the recent projects abandoned by Blittersdorf is Kidder Hill Community Wind project in Irasburg. Had the project been completed, it would have put two 500-foot turbines within a mile of 37 people.

Blittersdorf still has one more Vermont project in the cue, the Dairy Air Wind Project in Holland, Vt. That 500-foot turbine is still in the planning stages.

Charyk said the company is not going to rule out any new projects down the road, but the “current environment” with the Gov. Phil Scott administration has all but halted industry expansion.

That doesn’t mean there’s no possibility if the current environment were to change.

“He’s a life-long Vermonter,” Charyk said. “I think David will plan something down the road. … It’s too early to speculate.”

Another factor wind developers must consider is the implementation of Act 174, which gives towns more say on energy projects during the planning process. “Certainly, some of the plans have an anti-wind bias,” Charyk said regarding recent town plans being advanced under the law.

Charyk said what drives wind developers is a desire to reduce dependence on carbon-based energy and to meet the state’s renewable energy goal of 90 percent renewable by 2050.

“We have set commitments, and frankly, these cannot be done without wind as part of the solution,” he said.

Annette Smith, executive director of Vermonters for a Clean Environment, a group opposed to industrial-scale wind energy, said she’s not convinced Blittersdorf is through with Vermont.

“He’s still torturing the town of Holland, and there are all kinds of reasons why it’s a bad project, [but] they are proceeding, pouring money into it,” she told True North.

The single-turbine proposal in Holland already has local residents worried about turbine noise and other potentially negative impacts.

Smith added that Blittersdorf has been “his own worst enemy in terms of how he has been operating.”

“He has all kinds of violations at the PUC [the Public Utilities Commission], he’s been a bad neighbor already with Georgia Mountain, he put up a MET tower without getting his CPG [certificate of public good], and there are two net-metering turbines he’s engaging in a settlement agreement about,” she said.

Regulatory hurdles Blittersdorf faced with his proposal for wind turbines in Irasburg include the need to conduct a system impact study that examines the project’s compatibility with the local grid. Smith said the regulations slowed development.

“He filed the Irasburg project with the PUC and it was woefully deficient,” she said. “It didn’t have the system impact study and many other things, so they kicked it back and said it’s not complete. This is on David being a bad applicant.”