As John Adams — that passionate advocate of “independency” — wrote, July Fourth should be commemorated with “Pomp and Parade, with [Shows], Games, Sports, Guns, Bells, Bonfires and Illuminations from one End of the Continent to the Other from this Time forward forever more.”

There’s a more serious side to July Fourth when we remember what makes America exceptional, as set forth in those truly revolutionary words in the Declaration of Independence:

We hold these truths to be self-evident, that all men are created equal, that they are endowed by their Creator with certain unalienable Rights, that among these are Life, Liberty, and the pursuit of Happiness.  That to secure these rights, Governments are instituted among Men, deriving their just powers from the consent of the governed.

The Founders pledged their lives, fortunes, and sacred honor to protect the cause of liberty and the self-evident truth that all men, including kings, are created equal. 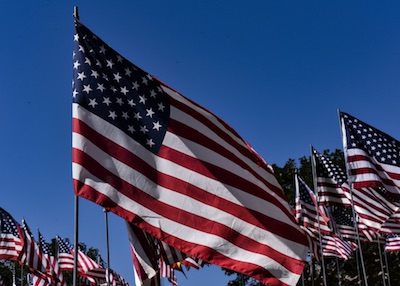 Is it possible that this July Fourth, drawing on the wisdom of our presidents and the patriotism of the Declaration of Independence, we will set aside our differences and reaffirm our commitment to a red, white, and blue America?

Abraham Lincoln, who knew something about the unique character of America, praised the 56 men who produced the Declaration of Independence for their “coolness, forecast, and capacity to introduce into a merely revolutionary document an abstract truth, applicable to all men and all times” — that is, that “all men are created equal.”

No wonder, then, that in war, recession, and even a pandemic, our presidents have turned to the Declaration of Independence for inspiration.

On July 4, 1942, some seven months after Pearl Harbor, President Franklin D. Roosevelt said that never since it was first created in Philadelphia had July Fourth come “in times so dangerous to everything for which it stands.”

To the Army of the American Revolution, Roosevelt said, the Fourth of July was “a topic of hope and inspiration.”

The men who were fighting for freedom, the president declared, took heart in its message—”the assurance of the right to liberty under God.”

On July 4, 2002, nearly 10 months after the terrorist attacks of 9/11, President George W. Bush, speaking in Jackson County, West Virginia, said that since the Declaration of Independence, “freedom has had a home, and freedom has had a defender.” Unlike any other country, the president said, America came into the world with a message for mankind—“that all are created equal and all are meant to be free.”

Bush quoted the Air Force pilot who, when asked if anyone on his base had a personal connection to the victims of September 11th, said, ”I think we all do. They were all Americans.”

As ever before, said Bush, America bore the hope of the world. From the day of our founding, the president added, “America’s own great hope has never been in ourselves alone. The Founders humbly sought the wisdom and the blessing of Divine Providence.”

On July 4, 2020, in the middle of the COVID-19 pandemic, President Donald Trump held a “Salute to America” event at the White House. If you believe in freedom, he said, if you believe in peace, then “you must cherish the principles of our founding and the text of our Constitution.”

“It is a firm foundation upon which all progress is achieved,” he added.

The president praised the loyalty and the valor of the men and women of the military “who have defended our independence for 244 years.” He singled out the pilots and their aircraft whose “steel frames, broad wings, and roaring engines” symbolize America’s “soaring spirit and undying resolve.”

Never in history, he said, “has a nation used so much power to advance so much good.”

On July 4, 1986, President Ronald Reagan, speaking from New York Harbor, recalled that Thomas Jefferson and John Adams had bitterly parted after the contested election of 1800, but had reconciled with the passing of the years. That, said the president, “was their last gift to us, this lesson in brotherhood.”

America’s past, of which we are so proud, Reagan said, as well as our hopes, and aspirations for the future of the world and this much-loved country—“these things far outweigh what little divides us.”

“Tonight, whatever the trial and travail,” the president said, “let us pledge ourselves to each other and to the cause of human freedom — the cause that has given light to this land and hope to the world.”

Reagan urged that pledge of unity 35 years ago. Is such brotherhood possible today? Do we still believe in the motto, “E Pluribus Unum”? Are we stuck in a rigid mindset of red and blue, black and white, rich and poor? Or is it possible that this July Fourth, drawing on the wisdom of our presidents and the patriotism of the Declaration of Independence, we will set aside our differences and reaffirm our commitment to a red, white, and blue America?

The answer rests with us.

Lee Edwards is the distinguished fellow in conservative thought at The Heritage Foundation’s B. Kenneth Simon Center for Principles and Politics. A leading historian of American conservatism, Edwards has published 25 books, including “Just Right: A Life in Pursuit of Liberty.”

7 thoughts on “Why ‘Red, White, and Blue’ should bridge red vs. blue divide on Fourth of July”