I got my National Rifle Association hunter’s safety course certification in 1975 through the Boy Scouts of America. I never renewed my membership.

Claude Taylor, a former staff member of the Clinton White House, heads a Maryland-based political action committee called Mad Dog PAC. The group put billboard messages around the country saying “the NRA is a terrorist organization.” Taylor’s rationale? “With the GOP majority in the House and in the Senate, the NRA makes impossible any meaningful, common-sense gun reform. That includes background checks and assault weapon ban,” Orlando Weekly reported. 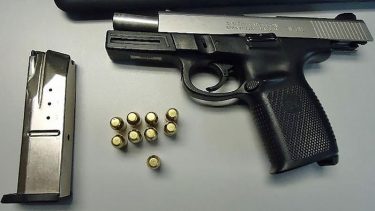 John Klar: “I’m stunned that our Vermont legislators have so little comprehension of the importance of the Second Amendment. They would make me a criminal in my own home for doing what my family has done for centuries here in Vermont.”

Former Connecticut Gov. Dannel Malloy chimed in, proclaiming, “The NRA today is a far cry from the NRA that in 1999 said that teachers shouldn’t carry weapons in schools. … Or in the 90’s said we should have universal background checks. They have in essence become a terrorist organization.” A short time later, in a March 10, 2018, NPR interview, Malloy wavered: “I said that the NRA acts like a terrorist organization. Webster’s defines a terrorist organization as one that uses fear to effect its goals. What organization in America has used fear better than the NRA? … Americans believe in universal background checks. The only reason we don’t have them is the NRA, and the politicians they have purchased in Washington — including President Trump. … The NRA is taking advantage of people’s deaths to make the case that we need more guns. I’m not accusing them of pulling the trigger, but in some cases I think there is blood on their hands.”

According to these gentlemen, the NRA is “a terrorist organization” with “blood on its hands” because it is responsible for Republican power, the outcome of the presidential election and the absence of Democrat-desired background checks and “assault-weapons” bans. Hardly terrorism. If those things are true, then I’m sending the NRA money. It’s called democracy.

As to fearmongering and Malloy’s assertion that the NRA uses fear, I haven’t personally had much fear struck into my bones by the NRA lately. I think GunSense Vermont and Sen. Philip Baruth, P/D-Chittenden, have enlisted fear, as have Sandy Hook Promise, the Brady Campaign, the Giffords Law Center, Parkland “March for Our Lives,”, and other anti-gun groups. In Vermont, a non-shooter who did not break the law was used to justify taking away numerous gun rights from law-abiding citizens — proponents of more gun restrictions still invoke his case as rationale.

I suppose I could call these people “terrorists” for seeking to use fear to confiscate our longstanding rights, but I wouldn’t wish to fearmonger. Instead, I am encouraged to support the organizations that have sworn to protect Americans’ constitutional freedoms, especially against those who use fear tactics to label political opponents as terrorists. There is the Second Amendment Foundation, Jews for the Preservation of Firearms Ownership, Gun Owners of America, Oathkeepers, and Gun Owners of Vermont.

Relentless efforts by self-righteous zealots to erase the protections of the Second Amendment persist, including new bills in Vermont’s current legislative session. Baruth wants to make it illegal for us to keep our weapons unlocked in our own homes (S.22). I keep a shotgun in the corner for critters, a handgun nearby for intruders, and a rifle to snipe at coyotes, if given the chance. I have no minor children, but S.22 would threaten me with a year in prison each time I left a firearm “outside [of my] immediate possession or control without having first securely locked the firearm in a safe storage depository.” I’m not sure who loves this proposed law more — the coyotes or the burglars.

I’m stunned that our Vermont legislators have so little comprehension of the importance of the Second Amendment — the Amendment that “binds all the others.” They would make me a criminal in my own home for doing what my family has done for centuries here in Vermont. Actual criminals are to be given an advantage when breaking into a house to rape or rob — at least over those victims who comply with S.22.

Is a car’s glove box a “safe storage depository” under S.22? If not, Vermonters will no longer be able to keep a gun in their car (except on their person, at all times). Our Vermont daughters will not be able to protect themselves on remote roads on dark nights by keeping a handgun in their car. If a glove compartment is considered safe storage, shall we always keep our gun locked up so that when road rage, carjacking, or drunken assaults occur we can fumble for our keys in lieu of exercising our inalienable rights?

S.22 is vague, absurd and violates both the U.S. and Vermont constitutions. It is an insult to our Vermont way of life and an attack on our constitutional liberties. I weary of such tactics, and so I’m going to pay dues to the NRA for the first time since 1975. I think I’ll pay extra.

The NRA and other gun-rights groups are vitally important — now more than ever.

32 thoughts on “John Klar: Why I’m joining the NRA”