The scandal-ridden Dr. Anthony Fauci, director of the National Institute of Allergy and Infectious Diseases (NIAID), says that Vermont’s high compliance with COVID-19 mandates make the state an example for the nation to follow.

“This virus is a formidable foe,” Fauci said Tuesday. “You give it an opportunity to re-emerge its ugly head, whether you are in the beautiful rural area of Vermont or the middle of Manhattan or the Bronx, that virus is going to take advantage of that,” Fauci said. “So please, you’ve done so well, don’t let your guard down.” 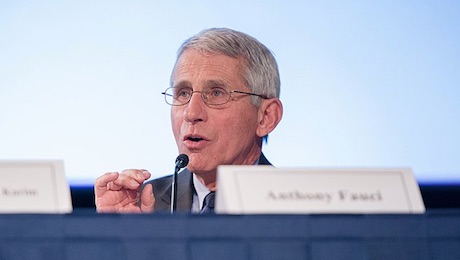 Vermont has been one of the most vaccinated states in the nation against COVID-19, yet it also has high case counts and deaths among the vaccinated.

Republican Gov. Phil Scott recently highlighted that 70 percent of Vermont schools are doing remote learning about three to four days per week. Some studies show that remote learning has been detrimental for students who reportedly have a lack of motivation when learning online.

Fauci downplayed any notion that Vermont is one of the least densely populated states in the nation, and that this affects case counts.

Among a handful of scandals that the doctor is weathering, some have noted Fauci’s alleged role in financing “gain-of-function research” at a lab in Wuhan, China, involving versions of the coronavirus.

“Dr. Fauci, I don’t expect you today to admit that you approved of NIH funding for a gain of function research in Wuhan, but your repeated denials have worn thin,” Sen. Rand Paul, R-Ky., told Fauci during a recent hearing.

According to a report by the Virology Blog, the phrase gain of function research means it “gives an organism a new property or enhances an existing one. The organism can be a virus, bacterium, fungus, rodent, bird, fish, or anything that can be experimentally manipulated.”

“Fauci, 80, is under fire amid reports that the National Institute of Allergy and Infectious Diseases allegedly used thousands of taxpayers’ dollars to fund experimental testing on dogs,” The Sun reported two weeks ago.

TownHall.com’s story “Six Bombshell Revelations from Fauci’s Emails” includes that Fauci dismissed early warnings that the virus could be man-made and that he often told people that the masks don’t work and that people shouldn’t wear them before telling the public differently.

According to a report by The Western Journal, there are currently efforts among Republicans in Washington to oust Fauci from his job.

“A tangible sign of Republicans’ discontent with the Biden administration’s management of the COVID-19 pandemic has emerged with a GOP-led effort to fire Dr. Anthony Fauci,” it states.

The bill titled “Fauci’s Incompetence Requires Early Dismissal” or “FIRED” is said to be a formal public statement, further action would be needed to begin the firing of Fauci.

While Vermont has been one of the most locked-down states and it’s seen its economy turn to massive federal dollars to maintain stability, over in Florida where lockdown policies were largely limited the state is seeing nearly half of all new economic growth in the nation during September in terms of new job growth.

On social media, some Vermonters continue to call for stronger COVID-19 policies, even after such restrictions were cited as a significant reason for voter backlash against Democrats in multiple state elections last week.

See how we can use MULTIPLE strategies to fight Covid, not just ONE!! We should be doing ALL of these at the same time!! We need to do MORE than what we are doing right now, Vermont, our high case #'s persist!!#vtpoli #vted#vtleg https://t.co/liaPPiI5em